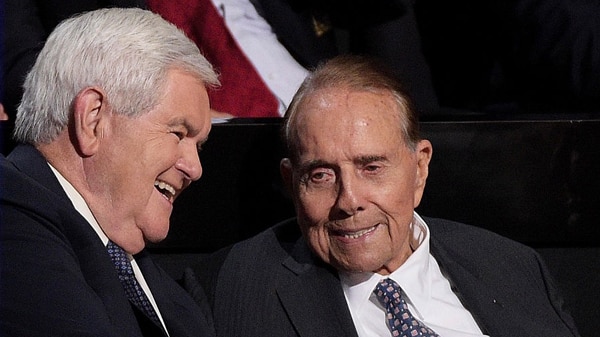 The passing of Senator Bob Dole marks the end of an era.

Senator Dole’s service in World War II, his love for President Dwight Eisenhower, (with whom he shared Kansas roots), and his dedicated life of public service, despite a severe war wound, made him a remarkable man.

Senator Dole was a very effective leader of the Senate who was key to implementing the Contract with America.  He was a major architect of the bipartisan effort to develop an effective food program for low-income Americans, and a staunch defender of American agriculture.

We often attended Senator Dole’s birthday parties in Washington.  His parties brought together an amazing number of elected Republicans and Democrats, congressional staff, lobbyists, and journalists.

The Bob Dole fan club was wide and bipartisan. His extraordinary wife, Elizabeth, a Senator and Cabinet member in her own right, was always supportive and by his side.

Senator Dole was a unique American figure whose courage, dedication, endurance and patriotism made him worthy of study and emulation.

Our hearts and prayers go out to Elizabeth and the Dole family.  We, like millions of Americans, will miss Senator Dole and will cherish his memory.