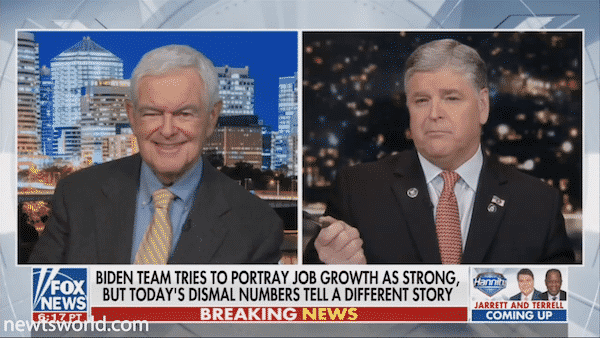 Newt and Sean discusses the many threats the United States is currently facing and why the Biden administration’s weaknesses will only worsen these troubles.

This is the most dangerous administration since Buchanan who was the president just before the Civil War. No one should kid themselves the Chinese are developing a whole series of systems designed to defeat us, they have a very effective international diplomatic strategy. They’re developing all sorts of new weapons. We’ve had a series of Admirals tell us that we lose every single border game in which we try to take on communist China for Taiwan. We just had a leading general in the space command to reported that we are being attacked every day, and we know these guys pay attention, we’re being attacked every day by the Russians and the Chinese in space assets. We have a huge problem; we have a news media incapable of dealing seriously with the world and we have national leadership in the white house and in Nancy Pelosi and to some extent Schumer who are incapable of the kind of changes we need. I think we are now entering one of the most dangerous periods in American history rivaling the period just before the Civil War or the Revolutionary War. And I think people need to understand how really deeply serious the crisis is going to become. And all of our opponents are watching Biden fall asleep, they are watching Kamala Harris laughing, and their thinking to themselves, this is the executive branch leadership? This is the commander-in-chief? Those are signals of weakness that are extraordinarily dangerous when seen by people as tough as Vladimir Putin.

Two things, Miranda Devine’s new book, and just did a podcast on Sunday with her. Her new book Laptop from Hell is unbelievable. You cannot read that book and not reach a conclusion that President Biden knew what his brother and his son were doing and that it involves a level of corruption I think we have never seen a corruption which involves Ukraine, Russia, and China and is clearly a national security crisis. It explains a lot of the timidity that Biden has when detailing with China. In terms of the empire situation, which is in essence a tax, this administration the fact is big government socialism does not work. We are watching it in inflation, we’re watching it in unemployment, we’re watching the energy crisis, we are watching it at the border, we are watching it in our school systems, and I think this is all going to come crashing down next year. I think we may have a historic sweep on a scale that even you and I when we were together in 1994, when we picked up 53 seats, John Baner picked up 64 seats. I think this could be a sweep that far exceeds those. Because I think people are going to form a this ain’t working coalition, it’s more than just Republicans, it’s going to be Republicans, Democrats, and independents who work around and say this isn’t working.