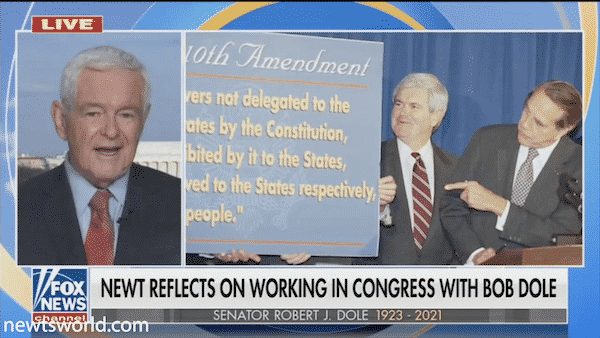 Newt reflects on the life and legacy of Bob Dole and explains why Hunter Biden must be thoroughly investigated.

Let me say first our hearts and our prayers should also go out today for Elizabeth. Today would have been their 46th wedding anniversary. So, it’s a very poignant time for Elizabeth and for Robin, his daughter. Look, he was a very effective legislator. There is a certain mythology that grows up in Washington after you retired or pass away. He was not a kindler or gentler person. He was a very tough partisan who was also very good with people. So, he could on the one hand do everything possible to defeat the liberal Democrats in the senate but at the same time be personal friends with a number of the folks that he was dealing with. And he was generally very effective. The Contract with America did dramatically better in the senate because it had Bob Dole’s support and because he thought through, and I would go over occasionally when I was speaker, and we would try to solve some problem and I realized how much more complicated the senate is than the house is and Dole in his career had mastered that complexity. He was a remarkable leader of the senate.

Yeah, I think that’s partly because we had an ability to be very tough professionally but not personally, to recognize that we were in a tough business but both sides were in a tough business. So, you had to respect your opponents. After all, they won elections, too. The people had chosen them to be there. And your job was to find a way to make it work not find a way just to make it stop. And I think that Dole personified that. He did it in the house. But remember, he was also a Republican national committee chair. He was a very partisan Republican. He came out of a state which itself had been extraordinarily Republican for virtually the entire history of the state. And I think the thing that most struck me never quite left Russell, Kansas. There is a piece of Russell that was in him permanently wherever he was.

There is a new book out called Laptop from Hell. That is just astonishing. And the reporter who wrote it actually went through the laptop’s emails and puts them together for you there is no question that there are so many examples of Hunter Biden having gotten money from the mayor — the widow of the mayor of Moscow $3.5 million. Money from Ukrainians specifically talks in the laptop about a meeting at Cafe Milano with Ukrainians, Russians and Vice President Biden coming to the meeting. They have — the examples from China of multimillion dollars deals. And Hunter Biden all the way through it is basically peddling influence in Washington. I think it’s astonishing that the justice department has had this laptop now for several years and refuses, refuses to do anything with it. So, I do think Hunter Biden is going to be investigated.

They collectively lied without knowing what they were talking about and, of course we now know that the Russian hoax was itself a hoax. It tells you how sick the system is that all of those people who you would respect would sign something which was false