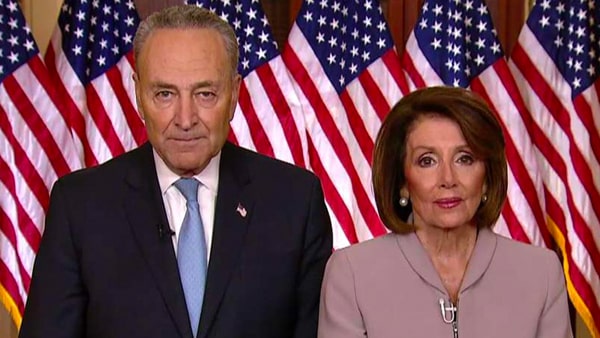 President Joe Biden, Vice President Kamala Harris, Speaker Nancy Pelosi, and Senate Leader Chuck Schumer are giving us a wonderful opportunity to win gigantic election victories in 2022 and 2024. But much more importantly, they are proving to every American that Big Government Socialism just doesn’t work.

Go to your local gas station and ask folks filling up their gas tanks if they think things are working.

Go to the grocery store and watch people coping with the rising cost of food and ask if they think things are working.

Go to small businesses whose shipments are still hung up on container ships anchored off Long Beach and ask them if they think things are working.

Ask people if things are working when the man who burned down the Christmas tree outside Fox News in New York City (causing $600,000 in damage) is released from jail without bail. He was back on the street before the paperwork for his arrest was finished.

When 80 people break into a Nordstrom just outside San Francisco and steal as much as they can carry, Americans know that things just are not working.

Through the American Majority Project, we captured all this in a new video, which you can watch and share with your friends around the country.

It is important to tie the continuing failures all around us to the underlying philosophy of Big Government Socialism, which simply does not work.

The Biden administration and the Democrats in Congress are committed to the most radical experiment in imposing government on Americans since the British failed to coerce free Americans in the period from 1770 to 1783.

Big Government Socialism seeks to control our bodies through vaccination and mask mandates while controlling our minds through radical indoctrination in schools, businesses, and government offices.

This passion for total control fits the warnings of Aldous Huxley’s Brave New World, George Orwell’s 1984 and Animal Farm, and Friedrich Hayek’s The Road to Serfdom.

We have seen this kind of radical effort to remake society before – from the Jacobins of the French Revolution, the Russian Communist effort to create the New Soviet Man, and the thought control of Maoist China (which is still underway with Xi Jinping as the new Mao). Again and again, radical belief systems have tried to force people into a government-imposed version of reality.

The impossibility of the thought processes of Big Government Socialism can be best understood through two Walt Disney movies.

The inability to deal with violence – whether from criminals, terrorists, or nation states – can be compared to someone who sees “The Lion King” and thinks it is a documentary. They believe lions and zebras like each other and sing and dance together. Why not release murderers, rapists, robbers, and others back into the population? Why not recognize and speak well of the Taliban and other terrorists? Why not tolerate the aggression of Communist China, Vladimir Putin’s Russia, the Iranian Mullahs, or the dictatorship of Kim Jong Un? They are committed to the Big Government Socialist worldview, why be mean to them?

The inability to design an effective economic policy of opportunity for all stems from the Big Government Socialists’ failure to understand the 1934 film “The Grasshopper and the Ants,” which is based on the Aesop fable that describes two different approaches to life.

The ants work constantly during the warm pleasant days of summer storing up food and preparing for the winter, which they know is coming. The grasshopper enjoys life, thinks all the hard work is a stupid waste of time, and makes fun of the ants, singing, “The world owes us a live’n” and telling the ants, “You shouldn’t soil your Sunday pants like those other foolish ants. Come on let’s play, and sing, and dance.”

As winter approaches, the grasshopper faces starvation while the ants are comfortably surviving the cold in a warm place filled with food. Only the ants’ generosity saves the grasshopper from starving to death. By the end, he’s singing a different tune: “I owe the world a live’n.”

President Joe Biden, Vice President Kamala Harris, Speaker Nancy Pelosi, and Senate Leader Chuck Schumer are giving us a wonderful opportunity to win gigantic election victories in 2022 and 2024. But much more importantly, they are proving to every American that Big Government Socialism just doesn’t work.

This video is a step toward winning that argument and getting America back on a track of success, safety, prosperity, and freedom.