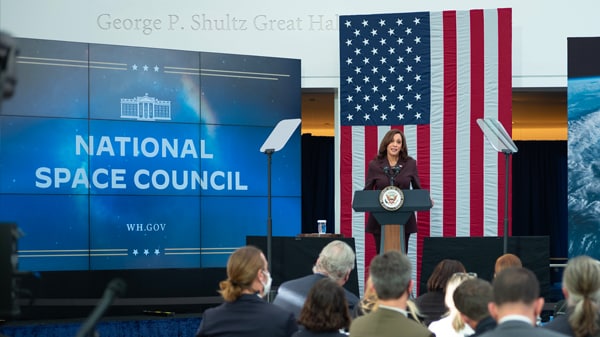 When the news media reports that a U.S. Space Force general is saying our space-based assets are under attack daily by China and Russia, it should be a cause for alarm.  Those assets are essential to the present American way of life and our ability to defend it.

The White House is quite aware of this threat, having been fully briefed by the national military space leadership about the extensive space weaponry capabilities of our adversaries.  Moreover, the White House also was given a clear look at what is needed to address the threat posed by China and Russia.  Reportedly, the second part of the briefing was answered with a statement indicating that none of the suggested American counter-weaponry was going to be approved.  “We are not going to be the first administration to militarize space” was the specific response.

Leaving aside the reality that space is already a warfare domain, doubts can be raised about the unverifiable comments in this confidential meeting.  But what cannot be ignored is the now obvious fact that the Joe Biden-Kamala Harris administration is not prepared to prioritize needed military space options.

The first meeting of the National Space Council horrified much of the space defense community.  Vice President Harris, the chair of the council, announced that the three top space priorities of this administration would be climate change, promoting rules and norms for governing space activities, and building a United States workforce in science, technology, engineering and mathematics (STEM). Each of these issues is a worthwhile pursuit, but they do not come close to the existential threat posed by our enemies to our way of life.

Punctuating the Space Priorities Framework focus announced at the council meeting was a speech by Secretary of Defense Lloyd Austin titled “The China Challenge.” In the speech the secretary acknowledged the Chinese advances in hypersonics, nuclear weapons, and cyberwarfare, all of which are space-related dangers. But his message was that we should not over-hype those threats.  Yet, at the same forum, Space Force Vice Chief of Operations General David Thompson said that China within this decade could exceed U.S. military capabilities. Both men were clear about the challenge the Chinese pose, but the difference in emphasis between the political leadership and the military leadership was notable.

What also should be noted about the announced space priorities of the Biden-Harris administration is their focus on looking down from space rather than looking outward into space. Their goal of reliance on more commercial space capabilities, mitigating space debris, space situational awareness and traffic management, and working closely with our allies are all positive initiatives.  But our adversaries are looking beyond Low Earth Orbit domination and preparing to occupy cislunar space, beat the U.S. to human habitation on the Moon, and build technologies that will permit them to go to Mars. The technologies needed to do those things, such as nuclear power for surface applications and space vehicle propulsion, will define space leadership of the future and, like space programs of the past, will achieve earthbound technological and economic breakthroughs.

We are also working on similar technologies, but evidently not at a pace that would match the China-Russia efforts. Nothing in the Space Priorities Framework indicates a quickening of that pace. Concentrating on looking down rather than looking up will give our adversaries reason to think that we are not prepared to commit to the kind of effort that would dissuade them

Speaking at the International Churchill Society in 2009, Richard Langford quoted Winston Churchill’s biographer, Martin Gilbert, as writing that Churchill saw the policies of Prime Minister Stanley Baldwin in the 1930s, especially with regard to the Royal Air Force expansion, as having given Hitler the impression, first, that Britain would not stand up to aggression beyond its borders and second, that if war came, Britain would not be in a position to act effectively even to defend its own cities.

After seeing the space priority messages of the Biden-Harris administration, many in the space community are wondering if China and Russia are not now making the same kind of calculations.