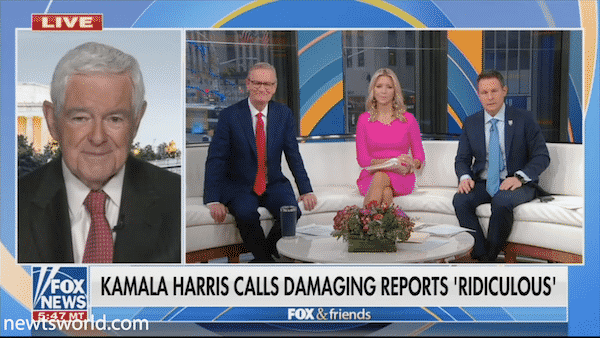 Newt shares how next year’s elections could be a disaster for Democrats due to how unpopular their current policies are.

Look I think the country understands that even more spending increases the inflation rate. The numbers last month were the worst in 40 years. And that means if you are a working American or you an American on a limited income you are paying more for gasoline, more for rent, more for food. It is a direct assault on the standard of living on most Americans but here’s the problem if you’re Biden and Pelosi and Schumer you’re already discounting next year, assuming you’re going to get wiped out, so you are trying to drive through everything to pay off your allies before the catastrophe hits. And I think it is a little bit like people who are trying to build a house on a beach while a tsunami is coming, and they are desperately trying to finish the house and this wave gets bigger every week and I’m amazed by it. I am very interested to see if Joe Manchin caves because what you’re seeing is a network of political power in Washington against the entire rest of the country. And Manchin and Sinema so far stood outside of that network and went are you guys crazy, but the pressure builds every week to go and pass something. And I think that’s where they’re at, so I think it’s going to get worse not better.

But look at the 20 or 30 or 40 House Democrats who are in very marginal districts. There are 75 House Democrats who won by smaller margins than the New Jersey state senate president who was defeated by a candidate with $2,300. So, if you are one of those 75 House Democrats, I’m amazed that Nancy Pelosi says to all of them, you know, being kneecapped by me this week is certain, losing next year is possible. Now, which one do you want? And they just fall in line, and they vote for stuff that they cannot possibly defend back home.