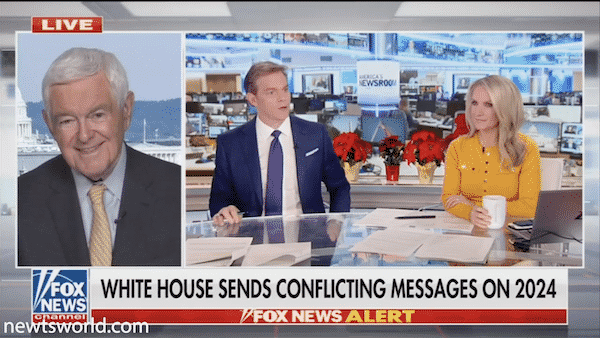 Newt discusses why President Biden and Democrats should focus on the issues that matter to Americans and why their current policies stand no chance.

Well, I mean first of all, it probably ought to be cripple America faster as a bill. And I think it’s not going to pass. You know the president could sit down there and live a delusional experience, but the fact is if Sinema of Arizona will not agree, and Senator Manchin of West Virginia will not agree they can’t get to 50 votes. And there is no evidence they will agree. By the way, the size bill they would agree to will drive the left wing of the Democratic party crazy in the House and would never pass the House. So, I think they are now — they would be much better off to say we did our best, we can’t get it done. Let’s move on and do something else. If they just stay stuck at this for another two or three months, they end up looking very weak and frankly pretty incompetent.

Well, you could imagine worse things, but you don’t need to. This one is bad enough. The other thing which you were just talking about, and I want to make a point. We have watched the worldwide elites follow a policy that has failed. This entire vaccination strategy as opposed to focusing on therapies. And saying if people get it, we’re going to take care of them. We could minimize the number who die. This strategy has failed. People like Fauci have no notion that it has failed. Their ego is so invested, and President Biden’s ego is so invested in a policy that is not going to work. I think the country increasingly knows it is not going to work and they know if you are getting a virus variant from South Africa from which nobody is dying, why are we panicking? This is just like the common cold or like the flu. We don’t panic every fall when the flu season starts. And I think we have to get over it, move on and recognize that for over a year our elites on a worldwide basis led by people like Bill Gates and Dr. Fauci, are elites who followed a strategy which has caused more damage than the virus itself.

Look, in a lot of ways — I’m surprised she didn’t just break out laughing. Why would any president with less than one full year in office decide to declare that they are a lame duck, and they aren’t going to run again? What they ought to be saying we fully intend to be here for eight years. We have a ton of stuff to do. A variation of what you said. These two people. The only thing worse than Biden as president is Harris as vice president, which is what probably props up Biden as president. I think if he had a strong, confident vice president he would be in much more trouble in terms of whether or not he can actually do the job.