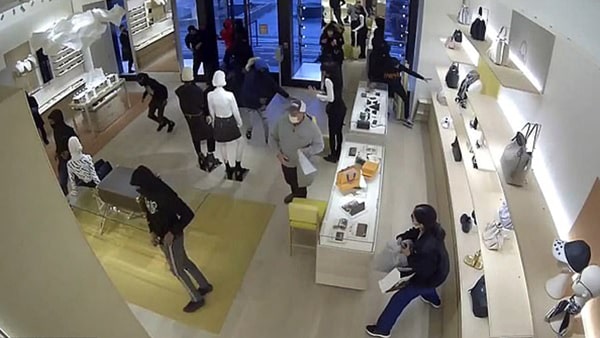 Over the past several weeks, videos have been posted on social media depicting so-called “smash-and-grab” robberies in cities across America.  Retailers ranging from Bloomingdales to Home Depot have been targeted by mobs of criminals who break into stores, grab armfuls of merchandise, assault employees, and flee.

Retailers are growing increasingly concerned with the level of violence and robberies impacting their stores. According to the 2021 Retail Security Survey by the National Retail Federation, approximately 69 percent of retailers reported an increase in the activity of organized retail crime for Fiscal Year 2020.  Additionally, 65 percent of those surveyed said that these criminal gangs were more violent than in previous years.

Tragically, the recent rise in rampant theft has negatively impacted businesses already struggling from the aftermath of the COVID-19 pandemic.  In Los Angeles, the number one city in the U.S. affected by organized retail crime, a celebrity designer was forced to close her boutique because the rise in crime made “it a difficult and kind of dangerous situation for me to keep my store there.”

In San Francisco, the number two city for organized retail crime, Walgreens and Target closed stores due to the increase in theft.  According to Walgreens, instances of shoplifting occur five times more often than in stores outside of San Francisco, and the cost of security is 50 times higher.

But it’s not just store owners who are concerned about the surge of theft and violence.  The FBI’s annual Uniform Crime Report concluded that murders in the United States increased by 30 percent in 2020.  This is the largest yearly increase since the FBI began recording crime data 60 years ago.

Notably, the number of homicides in at least 12 major cities across the country has already broken annual records in 2021. Five of these cities surpassed record murder rates that were set in 2020.

As Christopher Herrmann, an assistant professor in the Department of Law & Police Science at John Jay College of Criminal Justice, said, “I knew 2020 was going to be a bad year because of the pandemic but I really thought that a lot of these numbers would come down in 2021.”

Experts have said that there isn’t one specific cause to the rise in crime that we are seeing across the country.  However, it is evident that destructive, weak policies on crime and attacks against police play a central role in encouraging offenders to commit criminal acts.

Violent and dangerous criminals freely roam the streets as a result of liberal judges and district attorneys who fail to prosecute offenders or set low bails.

For example, Waukesha terrorist Darrell Brooks recently murdered six people during a Christmas parade after posting a $1,000 bail.  Moreover, Deonta William stabbed two police officers after being released on bail.  William’s bond was reduced to $750 – from an initial $25,000 – and paid by a third-party activist group.

Following the absurd calls to defund the police in the midst of the Black Lives Matter riots last year, the Police Executive Research Forum found that the retirement rate in police departments skyrocketed to 45 percent, while resignations were up by 18 percent.  Additionally, cities such as Minneapolis and Oakland that initially reduced their police budgets in response to the riots, have reversed their law enforcement budget cuts because of crime spikes.

As Rafael Mangual, senior fellow and head of research for the Manhattan Institute’s Policing and Public Safety Initiative, wrote in a New York Post column, “We must not commit the error of viewing the issue of policing in isolation. Much like a quarterback with great wide receivers but a porous offensive line, the police can only do so much with prosecutors and lawmakers working at cross-purposes.”

Mangual’s bifurcated approach is correct. Americans must call for elected officials to support law enforcement and for prosecutors to hold criminals accountable for their actions.  Our nation’s laws must be upheld and enforced. If lawmakers and prosecutors continue to subvert public safety in the name of social justice, law-abiding citizens will certainly pay the price.