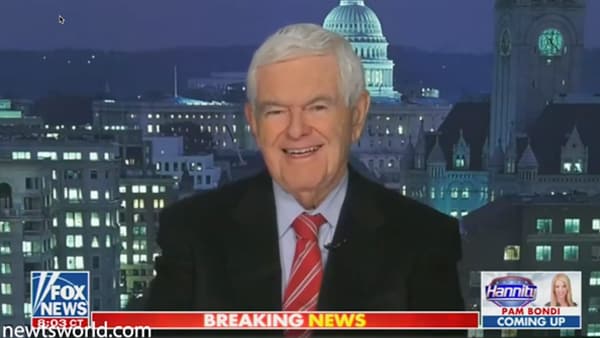 Well, you know I think the left ought to relax and accept the fact that Joe Manchin has been telling them for about 6 months now that he’s not going to accept the kind of big government socialist bill they want. At the same time, I think everybody who is conservative ought to relax and accept the fact this is the most dangerous and destructive presidency since Buchanan which led to the civil war. He was amazingly bad. The truth is the Biden administration is going to end up being extraordinarily bad and very dangerous. If you look at China, Russia, Iran, terrorism, North Korea. You look at the border that is totally uncontrolled. You look at the inflation rate. You look at your extraordinarily stupid and self-destructive energy policies. This is an administration that is in its destructive capabilities far and away the most dangerous we have had in about 160 years.

Sure, two different things. First of all I think you have to assume if you are a big government socialist whether you are Bernie Sanders or AOC or Joe Biden or Kamala Harris, you live in a fantasy world. You don’t understand any of the things that are happening. They all seem strange to you. Why can’t Putin be nice? Why can’t the inflation rate go away? Why can’t we have green energy at a reasonable price? So, I think from that standpoint you are dealing with people who are out of touch with reality. There is one piece of this that I am fascinated by. White house staffs very often forget that they didn’t win an election. That’s the president. The white house staff is staff. And the attitude they have towards Joe Manchin is going to alienate senators and house members unbelievably because these white house staffers think they are more important than the people who are selected by the American people to come to Washington and make decisions. It’s a very bad formula for the Biden administration.

No. Look I think you have to start with the notion that these are people who need therapy. Their level of anger is so — I am serious. We try to deal with this as though it’s a political problem. It’s not. It’s a mental health problem. These people are crazy. People like AOC are so out of touch with reality. You can’t have a political conversation with them because you are not on the same planet. They are planet fantasy left. I always tell people; these are folks who saw the lion king and thought it was a documentary. They think lions and zebras dance and sing together. They are shocked to discover that terrorists want to kill you, murders want to murder you, rapists want to rape you. It doesn’t fit their vision. Because that’s not the Disney movie they want too. And I think they look at a guy like Joe Manchin and go wow he clearly must be some kind of neanderthal he believe in balancing the budget, no inflation, limited government. What kind of guy is that?