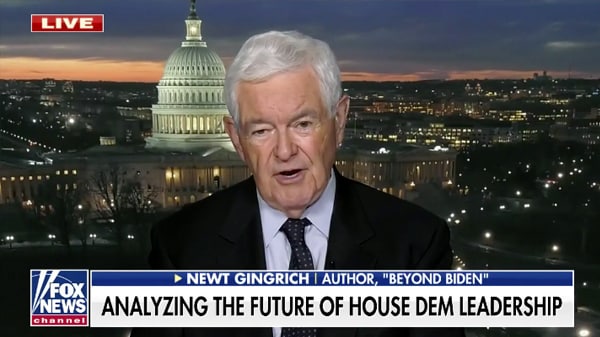 After assessing President Biden’s first year in the White House, Newt on “Fox & Friends” predicted a replay of 2021 with disastrous results in upcoming midterms for Democrats.

Well, first of all, this is a very big moment, Pelosi has been an astonishingly dominant figure and whether you like her or dislike her, whether you like or dislike her policies, she has been amazingly effective for a very long time. She survived losing the Congress. Came back as the minority leader, got to be speaker again, and with a tiny majority, she accomplished things I didn’t as a former speaker I didn’t think were possible. So, you at least technically have to have a real respect for her professionalism, her toughness, the degree to which she owns the house democratic party. When she leaves there will be a big vacuum. Hakeem Jeffriess is probably the best positioned and I think the way you phrase it is exactly right. It has to be somebody who has a foot in every camp, who has allies who are willing to accept them. There is a tendency by the news media to greatly overstate the importance of the squad. In fact, the news media in many ways makes AOC and the squad important. Their actual total votes about six, which is not enough to elect anybody. But also recognize this will almost certainly be the minority leader, not the next speaker. And so, the question will be in part for the Democrats who can get us back into a majority? That will be a real test between who can represent the left and who can get us back into majority? Not necessarily the same person.

I don’t think — I don’t think a Republican can judge that. I think that he certainly has positioned himself well. He has worked very hard to be broadly acceptable. But there are a number of other players there. I wouldn’t be too surprised to see four or five candidates initially because they — it’s a rare moment of openness. I also suspect that the number 2 and 3 slots will also end up being vacated partially because when they lose, and I think they will lose this fall, they are going to suddenly face this realization who has the drive, the energy, the charisma to get them back to a majority that will be the question if they had a big majority and picking somebody to sustain the majority. They have real problems. The problems are going to, I think, compound, and get worse as they go through this year. Partly brought on by Biden, but partly brought on by the fact that they have gotten too far to the left and they don’t really represent the country. They represent the left wing of their party. And that’s a very narrow base to try to sustain a majority in the house.

Well, remember, I have a pretty deep bias here. I’m a conservative. I think the policies he adopted are disastrous in the real world. So, you know, he is anti-American energy. The price of gasoline and heating oil go up. He has launched a program of inflation. People feel it in their pocketbooks every time they go to the store. He has totally failed to meet the logistic supply chain crisis. There are still 90 ships offshore waiting to be off loaded in southern California. You go through item after item and Biden’s problem is the real world. There is still 100,000 plus people coming across the border illegally every month. None of them with COVID checks. None of them with criminal record checks. So, we’re seeing a compounding of reality in ways that I think make it hard for them. Meanwhile, they simply took off too big a bite. Their idea of build back better was actually build back a lot bigger, and that’s not what the country wants. And so, I think we’re going to see a replay of 2021 with a disastrous result in November for the Democrats.