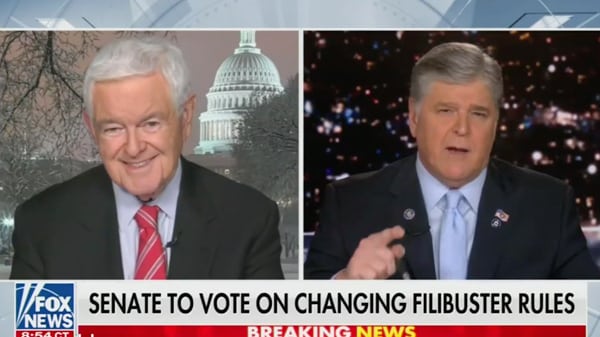 Newt calls out Joe Biden for either not having any plans to solve the many problems COVID-19 has created or failing at any plans he has put forward.

Well, I think you sort of captured it in your opening monologue. If you have a president who can’t solve the problem of enough supply for monochrome — monoclonal antibody, can’t solve the amount of supply for testing, can’t fix anything involving the pandemic, they have more ships sitting outside Long Beach harbor, about 121 now, than they had three weeks ago. So, the supply chain stays broken. Their answer to the price of beef is to set up this brand-new government program to support smaller producers and smaller factories who have no effect on the price of beef. It but it gives them an ability to pass out a billion dollars for political purposes. You go down the whole system, it’s like that. They basically understand that if the election is this year involve an honest count where you have to prove who you are to vote and where only citizens can vote, they’re going to lose. They’re going to lose badly in the house, they could lose 40-70 seats. So they got to find a way to rig the game.

I don’t know. Look, if you are to break every rule, if you’re willing to lie about every topic, if you can bring total pressure to bear, who knows? I mean — in the senate it comes down to whether or not Sinema and Manchin will stand firm in defense of the filibuster and whether or not you have in senator McConnell a leader who actually in a very tough way takes them on if they try to change the filibuster. Republicans can I think make it so painful they can’t do it.