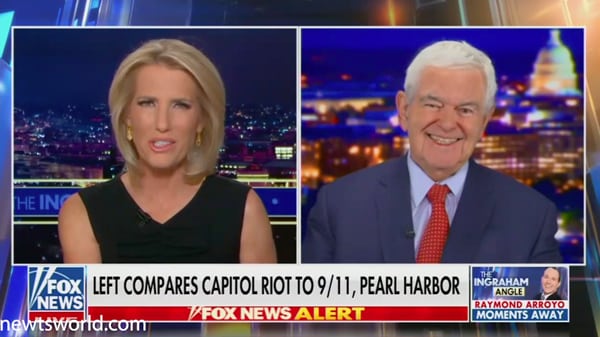 A lot of Jan. 6 events at The Capitol by Democrats are political theater meant to distract people from Biden’s failed policies.

Well, I think she is the person who is the most responsible for what happened. It was her job to ensure that there was adequate police and if they didn’t have adequate police, it was her job to ensure the National Guard was there. So, a lot of us I think is a dance by the Democrats who don’t want us to look very closely at what actually happened. If you will notice, the political committee they have created is, in fact, only looking at political things. They are not looking at the various ringleaders who have not been arrested. They are not at a lot of the details about whether or not the FBI was as involved. We note that the FBI was deeply involved in creating an entire project to kidnap the governor and pretend it was being done by white nationalists when, in fact, all the leading figures were FBI activists – so there is reason to question everything about what happened on January 6th. Again, a former speaker, I was deeply offended that anybody would do what they did on the capitol grounds. But as a former speaker, I was also really offended that the current speaker Pelosi failed so totally in her job which was to make sure this didn’t happen. This is a totally nutty environment we are operating in. Historians will say this is a period that is mildly insane.

First of all, that is as a former speaker I found totally offensive. I was a speaker when Bill Clinton was giving State of the Unions. It would have never had occurred to me as a matter of historic principle that the state of the union, which is required by the constitution was some petty partisan thing. But beyond that, she’s talking on a day when Biden gave the most viciously partisan, personal assault, I think any American president has ever given. I can’t remember any other speech that had the kind of vitriol, the kind of divisiveness, the kind of just plain nastiness that was in Biden’s speech today. These folks have mastered this hypocrisy of saying “Right after I finish beating you up, kicking him in the kidneys come up beat you on the ground, can I stand there and tell everybody how we want to work together?” That is what we saw today. By the way, Kamala Harris’s insane suggestion that pearl harbor that started World War II, 9/11, each involve thousands thousands of dead Americans were comfortable to what happened last year on the 6th of January. Granted most liberals doesn’t study history you had at most liberals don’t study history. She may not even know what pearl harbor was. She probably kind of knows the 9/11 involves something. But her comments, which I assume were wrote by somebody. Somebody understood and wrote that and they were idiotically stupid.

Sure, look, you have to accept the reality that you have a propaganda media and propaganda academic world. You have largely propaganda bureaucracy now. And I will tell you what worries me the most and every conservative should take this seriously, they have begun to lay the groundwork to use the 14th amendment to the constitution to literally block people from being allowed to run on the grounds that they were somehow tainted by the obstruction. This would be comparable to Iran or Russia or China. I think these people are crazy enough they may try to do it.