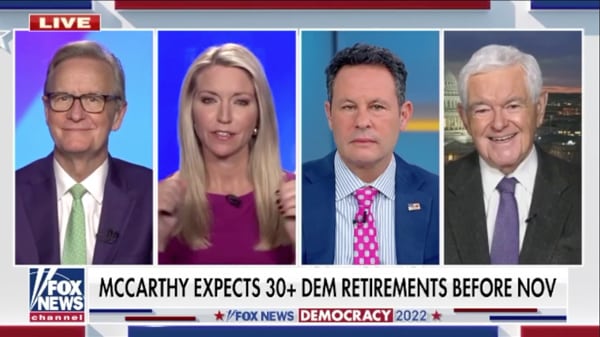 Newt spoke to Fox News Channel’s Fox & Friends about how the American people want political leaders who look for profound ways to unite the country.

I was going to say I think you just heard from the next speaker of the house and that’s what that retirement number tells you. First of all, the House under Nancy Pelosi is not a very happy place. With all the covid restrictions, all the voting by absentee, all the different things they are doing, the masking, the police requirements. Members actually get checked walking on the floor. I walked on the floor recently I was astonished that to get on the floor of the house. To get on the floor of the house you go through sort of a TSA system with a policeman watching you, as though you are some subservient person who is a danger to your colleagues. And I think these Democrats are looking forward thinking what is this going to be like if I’m in the minority and it’s just not any fun. So, I think Kevin is almost certainly right, you could easily be above 30 retirements before this is over.

I’m glad he transferred immediately to real issues, to real substance. Controlling the border is a big, big deal. We don’t know where the 1,500,000 immigrants from last year. We don’t know what the Biden administration has sent them. We know they weren’t checked for covid; they weren’t checked for criminal records. They could be in your neighborhood, and you’d have no idea that the Biden administration is shipping people around the country. But it’s deeper than that we had 100,000 people die last year from drug overdoses. We have an amazing number tragic number of suicides we have a mental health problem which exhibits itself in these homeless towns the size of the one in Los Angeles. So, I hope, and I believe with Kevin’s leadership the Republicans are going to have serious hearings looking at the big issues that affect our lives. As well as going through the stuff you have to do just to uncover all the bad stuff the Democrats did. But I think you have got to have both things not one or the other.

Look, I think we have to face a reality here. This isn’t 2016. This isn’t a country which is basically comfortable but angry. This is a country which is battered, frightened, for the first time Americans have a really deep sense that our best days are behind us, well, we are very intimidated by the scale of the Chinese challenge. As I said, we have mental health problems on a scale we have never seen, largely compounded by the worst public health decisions I think in modern history. All of which deserves to be explored. People want political leadership, which is going to be serious, have an honest conversation and find a way to bring us together to actually fix these things. Not just have more of this totally partisan bickering. And I think Kevin McCarthy with his whole notion of a commitment to America, and the kind of people he has been recruiting, I think he understands, this is a time for taking very seriously the challenges that the United States faces and that we faces as individuals.