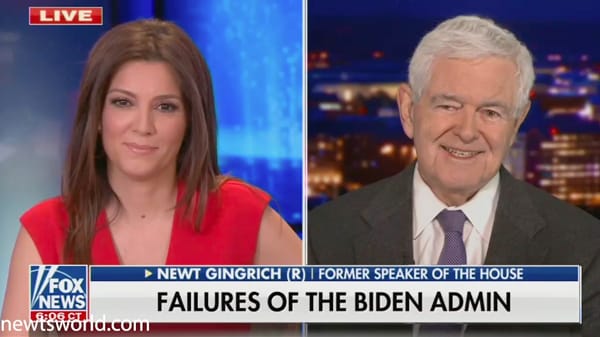 You are right. And frankly, the most transitory thing may be the Biden administration. Calista and I were out over the weekend. We went to two different grocery stores. Both stores had entire areas where there was nothing on the shelf. This does sort of resemble the Soviet Union during its decaying phase and Reagan used to tell jokes about this when you couldn’t find anything. And I think that people are going to be pretty fed up with it. But it also, I somebody, is going to kill the buyback better bill or build back better bill because it’s inconceivable that you could be already at 7% inflation, probably going to go up from there. So, you are going to break 40-year record and you are now going to add another trillion dollars in spending? I don’t think so. I think this guarantees that that whole project collapses and that they have nothing to show for it.

Well, look, of course that’s part of what they were doing. But big government socialism doesn’t work. It didn’t work in the Soviet Union. It doesn’t work in Cuba. It didn’t work in Venezuela. There is no place I know on the planet where big government socialism has worked. So, you are seeing a compounding effect, you are exactly right, starting with canceling the pipeline, anti-energy policies, which have raised the cost of gasoline. Anti- — and by the way, the cost of fuel goes all the way through the agricultural sector and is a major factor in why you are having the rise in the cost of beef and milk and other things. But it’s more than that. You know, they play games. There are 120 plus ships sitting off of Long Beach. Their newest bright idea was if you have most of the ships stay further out of sight further away from Long Beach then you wouldn’t notice them. They are still sitting there and despite months of work they have not come down at all. In fact, they have increased from about 90 to 120 container ships that literally can’t get through the port of Long Beach right now.

Well, look, I mean, I think it’s very hard for the administration to survive reality. I just tell people it isn’t working. Go stand at a gas station and ask people as they pump gas, they will tell you it isn’t working. Go to a grocery store, it isn’t working. Look at the flood of illegal immigrants who are not being checked for covid, not being checked for criminal records, it isn’t working. And by the way we have no idea where they are being sent around the country. Look at the murder rates. Look at the 85 people who robbed as a gang, a Nordstrom’s near San Francisco, it isn’t working. So, every time you turn around, the administration is faced with the reality that their big government socialist ideology is not working. It’s making things worse at a rapid rate. And these things compound. I was a congressman when Jimmy Carter was president just before Reagan. And he — as Carter began to fail, each failure would compound to another failure. And you just build a downhill momentum. That’s what’s happening, I think, with Biden.