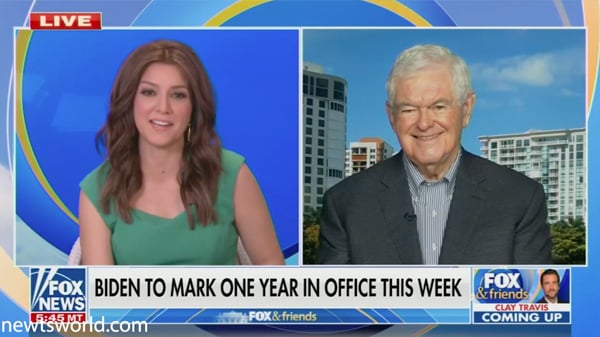 Newt discusses how the White House is facing backlash over its handling of key issues such as inflation and the supply chain.

Well, he may be capable, but I’m not sure he wants to. If you look at his last two speeches, the one in the capitol and the one in Atlanta, they were viciously partisan, very hostile, guaranteed to divide the country. They were sort of Biden at his worst. Gallup just reported that Biden entered the year with the Democrats having a 9-point advantage in party identity and ended the year with the Republicans having a 5-point advantage in party identity. Party identity is a very hard thing to shift. They shifted it 14 points if you add the two together. 14 points in one year in reaction to the Biden presidency. And I think part of its reality as you pointed out. You know, you have 101 ships still sitting off Long Beach, California. You have a logistic supply chain mess. You have the former head of Walmart saying his stores like, like the soviet era in Russia because they can’t put anything on the shelves. I think people look at all of this and they feel it every time they fill up their car. And they see a system that’s failing. And they don’t see any evidence that the Biden team realizes that.

Look, I think the problem the Democrats have is that they are absolutely fixed on their radical wing. They believe in big government socialism which just doesn’t work. And they desperately have to change the election law because if they can’t find a way to rig the elections, they are going to get wiped out. And I think they know that they know that in a straight-up, honest election, where everybody has to prove who they are. That, in fact, they are going to lose. They need to be able to pack the ballots, they need to be able to have their illegal votes, they need to be able to have same day voting where you don’t know who the person is and that’s why their election bill is so desperately important to them. And I think they know that they are at the edge of a cliff and if they can’t change the game, the American people are just going to repudiate them. They can’t fix these problems this year. They can’t get inflation down enough to matter. They can’t solve the supply chain. If anything, with the potential strike of longshoremen, with the difficulties with truckers, I think it’s possible that the supply chain will get worse, not better. And it’s beyond they still have an enormous number of illegal immigrants coming in this country. I just did a podcast with the mayor of Yuma, Arizona whose declared emergency for his city because of the shear, they’ve had a 2,500 percent increase in the number of illegal immigrants coming to their city since Joe Biden was sworn in. So, you look at all the different things he can’t fix and his problem is reality it’s not rhetoric. Because the average American goes out. They see all of this. They are living it. And I think that’s the problem he has got.