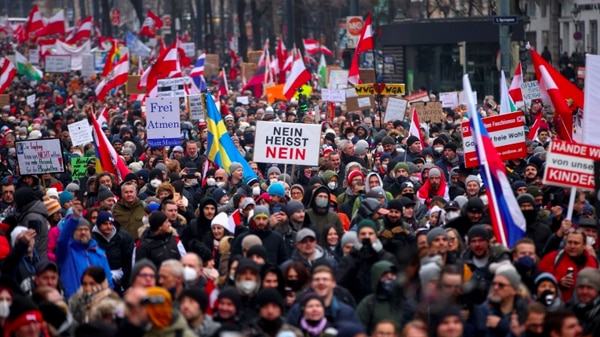 It is hard to understand which is more frightening: the Australian radicalism about COVID-19, the Austrian effort to coerce its citizens, or the attitudes of American Democrats who regard extreme sanctions as reasonable behavior toward the supposedly bad people who don’t get vaccinated or wear masks.

It is hard to know which is more frightening: the Australian radicalism about COVID-19, the Austrian effort to coerce its citizens, or the attitudes of American Democrats who regard extreme sanctions as reasonable behavior toward the supposedly bad people who don’t get vaccinated or wear masks.

Let’s consider each one.

In Australia, the government felt so threatened by the best tennis player in the world that it intervened decisively to block him from entering the country and competing in the Australian Open.

Ben Domenech in the Transom wrote, The Australian government repeatedly lied when it set the rules for Djokovic to participate in the tournament. It lied about why it kicked him out – and then it barred him for three years.

“Well, perhaps it’s because Australia — in its foolishness, because they are not just descended from penal colonialists but also inherited the mindset of their captors — has gone down the road of total authoritarianism, regardless of the cost,” Domenech wrote.

The net result has been what former Prime Minister Tony Abbott has called a “health dictatorship.”

Kylee Zempel in the Federalist pointed out that even Anthony Fauci has said the recent strain of the virus is mild. And at the same time so infectious that everyone will likely get it at some point. She wrote that one side of Djokovic debate is comfortable with the idea that a health, disciplined tennis star can decide what he puts in his body. The other side is siding with Australia, which has arrested people for not getting vaccinated and put them in quarantine camps.

“The left’s talking heads are free to bloviate about ‘civilized society,’ ‘pandemic requirements that apply to everyone,’ and what it means to be a morally responsible ‘adult,’ but it’s safe to say that when your side resorts to cheering on authoritarians, you’re probably not the hero,” Zempel wrote.

Australia’s case gets a lot of coverage because it is a fight involving the best men’s tennis player in the world. However, half a world away, the Austrians are in their own fight over mandated universal vaccinations.

A friend sent me the following report from Vienna:

“For Austrians—vaccinated and unvaccinated alike—the last few weeks have been a nightmare. Despite politicians assuring everyone over the summer that the pandemic was over, this small country in the heart of Europe is now the first Western state to attempt a general vaccine mandate.

“Those who have decided—for a variety of reasons—not to take the vaccine have experienced recent events as pure psychological warfare. Immediately after announcing the mandate, the government and its advisers started to present their ideas of how to enforce it. Minister of Constitutional Affairs Karoline Edtstadler announced that anyone who refuses the vaccine would be fined up to 14,400 Euros a year—enough to ruin an average family.”

The Austrian Parliament voted 137 to 33 for the vaccine mandate, which will fine Austrians up to 600 euros ($680) if they aren’t vaccinated by March 15 – up to 3,600 euros if they dare to fight the fine in court, according to Reuters.

As Austrian political leader Herbert Kickl told the news service, the mandate will make unvaccinated Austrians “second-class citizens,” saying, “This vaccine mandate strips people of their rights. In one move, millions of Austrians will be downgraded.

You should not assume these steps toward totalitarianism only occur only outside the United States. Here is recent polling among Democrats about imposing tough measures on those who fail to do what they are told.

There is a potentially totalitarian party in the United States. They are called Democrats.

Let’s not let America join Austria and Australia in the pursuit of maximum government power to impose dubious policies. Let’s remain the land of the free and the home of the brave.