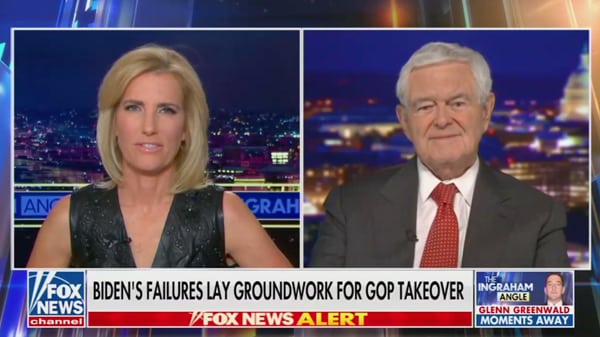 Newt discusses how President Biden’s remarks on Russia invading Ukraine are dangerous to the security of the United States.

First of all, I want to say I think everything you just said was powerful and accurate and one of the best openings I’ve ever seen you give, so I want to commend you for that. We are at a historic turning point. The truth is Biden set us up for an easy victory, he said I don’t know what they stand for. Kevin McCarthy this morning, the next speaker of the house promptly issued a list of things we stand for. I am working a lot of different people including Kevin on what we could do, there is a huge potential for a Republican contract this year much like we had in 94. I’ve not pretended favor one in the recent past, but I think this is the year where we ought to come out and say here are ten big things we will do. This is what you can count on. Frankly, a number of them can be done to matter what Biden does. You can design it in a way that has a huge impact. I do think we have to run a positive alternative it’s not enough to be anti- Biden, that’s why my most recent book was called Beyond Biden. I think the country is worried. The biggest thing I would bring to bear, particularly after this last press conference by President Biden, this is not just political, this is historic. We have the weakest president in modern times who openly said it was okay for the Russians to take a piece of Ukraine and then to spend the next 24 hours backtracking. He tells lies in what I think is troubling is and he may actually believe his own lies. He may live in a world where he makes things up and then he believes whatever he makes up. Which in a president of the United States is really dangerous. So, I think we as Republicans have an obligation not just to reach out to our base, but to broaden the base dramatically by offering solutions. You just showed up picture of Glen Youngkin the new governor of Virginia who does a great job of reaching out to independents, to Democrats, to minorities, to creating a vision of a better, Virginia that brings people together. All those governors you showed who are doing great jobs, same thing. They are positive and solution oriented. As a result, not only are their states doing better the governors are doing pretty darn well.

I thought Biden did a remarkable job yesterday of talking almost two hours and a lot of what he said was baloney, nonetheless he seemed pretty coherent. Tonight, you saw a return to the Biden that is frightening. If you have a president who is cognitively confused on a regular basis, who refers to Kamala Harris as President Harris and who as you just pointed out referred tonight at the presidents in the senate. Again and again, you have to wonder how weak is he in terms of his grip on reality and how dangerous is it. Remember our system has a commander-in-chief as president. We require somebody who is strong, coherent, capable, you can like or dislike Donald Trump, but he was a strong person, he knew what he was saying, he was not confused about whether or not senators were presidents. I think that when I watched Biden, my fear frankly is not political, it’s historic. That he could potentially get us in the kind of trouble that would shatter the next 20 or 30 years. And I think that is really sobering.