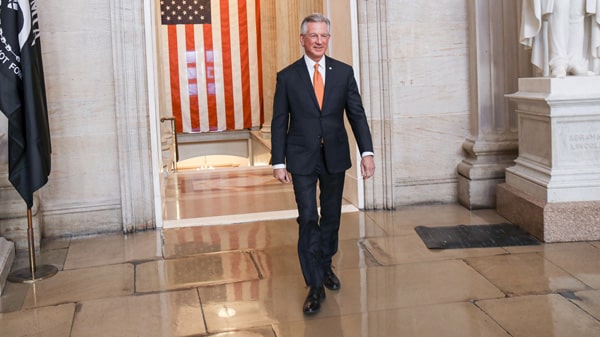 After 40 years as a college football coach, Tommy Tuberville traded in his headset and playbook for a seat in the United States Senate. He’s fully committed to his new job, but he’s still a coach at heart.

On my podcast, Newt’s World, I sat down with Coach Tuberville to discuss football, his transition from coaching to Congress, and the direction he thinks America is headed.

When Coach Tuberville first entered Congress, Coach Tom Osborne of Nebraska told him, “Tommy, it is going to tear you up knowing that you just can’t get things done like you could as a coach.” For most people who are competitive and love to win, the slow back and forth of Congress could become frustrating, but Tuberville said it simply makes the wins sweeter.

Coach Tuberville told me the Senate is more about recruiting and meeting people where they are than it is about play calling and executing. For instance, he recalled talking with Democrat colleague Sen. Kyrsten Sinema. He said Sen. Sinema is strong willed but simply wants to help the American people – a desire evidenced by her decision to side with Senate Republicans on the Democrat’s push to eliminate the filibuster just weeks ago. He said he enjoys working with people who are passionate yet reasonable and who want what is best for their constituents and the American people as a whole. It’s a lot like working with players on a team, he said.

However, it’s not always easy. During our discussion, Coach Tuberville said the ever-increasing divisions in our country are sometimes widened in the United States Capitol Building – something that he hardly experienced on the football field or in the locker room. Partisan divisions are one thing, but he lamented the growing fractures around race, ethnicity, and creed. While coaching, he brought players in from all different backgrounds, and they became like family. “There’s no color in the stands other than what your team colors are,” he told me. However, as our culture strays further into wokeism and censorship, Tuberville said that football could be pulled along with it.

Sen. Tuberville said he has found one commonality between coaching and representing the people of Alabama in the Senate: “You’ve got to be yourself. You can’t be anybody else. Don’t try to reinvent the wheel. Do what you know.”