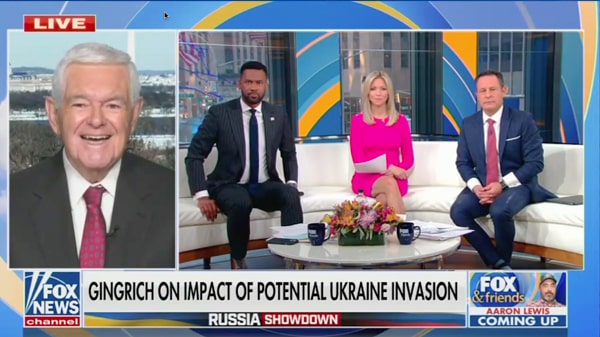 Newt: Americans are at a tipping point. They are fed up with the U.S. Mexico border crisis. They are sick of district attorneys in left-wing cities who are supporting criminals over the police.

I think it goes back before the Biden administration. The Germans by shifting off of energy supplies that they had and becoming more and more reliant on Russian natural gas gave Russia leverage right into the heart of Europe. The strongest economy in Europe today is totally dependent on Russian energy. And they know it. They have been basically useless as a partner in trying to contain Russia. I think at the same time, you have to raise the question, if we were to be passive and allow Ukraine to be overwhelmed by Russia, whether militarily or otherwise, what does that then mean for Latvia, Lithuania, Poland, Hungary? There are a lot of countries around Russia that used to be part of the Soviet Union. And from everything we know, Putin as a former KGB agent would like to create as much of the Soviet empire as he can. The Biden administration is trapped in a situation where they have to find ways to both strengthen Ukraine, doesn’t have to be American troops but supplies and training. They have to send signals to Moscow that the sanctions will be so severe that combined with the military costs of trying to occupy — Ukraine is a big country. The combination of the two leads Putin to decide to go do something else for a while.

I did a podcast with the mayor of Yuma after he declared an emergency because they had a 2,500% increase in the number of illegal immigrants in a year. But let’s be clear. The problem on the American border is not incompetence. It is a deliberate policy of the Biden administration and the democratic party to let the maximum number of people into the U.S. illegally with no check for COVID and no check for criminal behavior. This is a policy. It’s not a problem. As long as Biden wants that policy, you’ll see millions of people come to the U.S.

Thank you. I think you’re right. I think the reaction to that actress that attacked the dead policeman she got fired immediately, that’s the sign that the tipping point is occurring.