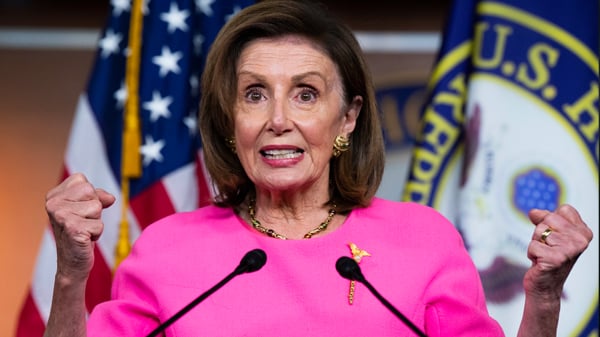 When I was Speaker, we passed numerous bills with bipartisan majorities. By contrast, Speaker Nancy Pelosi has been the most consistently partisan, virtually dictatorial, Speaker in modern times.

Despite the passionate screams of the Left, historic fact is irrefutable.

When I was Speaker, we passed numerous bills with bipartisan majorities. The Contract with America Republican Congress worked with Democratic President Bill Clinton and (by following the regular legislative process with subcommittees, committees, and floor amendments) we got a surprising number of House Democrats to vote with us.

By contrast, Speaker Nancy Pelosi has been the most consistently partisan, virtually dictatorial, Speaker in modern times.

I felt compelled to write this brief history of our two speakerships after Dana Milbank asserted in a Washington Post column on Feb. 4 that “Gingrich pioneered the now-common refusal to negotiate, which brought hopeless gridlock and dysfunction to the political system.”

Allow me to share the facts which show how breathtakingly ignorant or willfully dishonest Milbank and the entire propagandistic Left is about the bipartisan record of the Contract with America Republican Congress – and the viciously partisan machine the Pelosi Speakership has imposed.

There are so many examples of our Republican bipartisan approach that we have an entire section at Gingrich 360 where you can compare our efforts to the Big Government Socialists’ efforts to dictate to everyone.

Speaker Pelosi in both her first (2006-2010) and current speakerships has consistently ignored Republicans and usually even ignored most Democrats.

It was Pelosi who famously said about the hugely complicated Affordable Care Act (a.k.a. Obamacare) bill, “we have to pass the bill so that you can find out what is in it.” Consider the arrogance of telling 534 other duly elected representatives of the American people that they will be voting on a huge, complex, extraordinarily expensive bill on her say-so and with no personal knowledge. That is the essence of the Pelosi dictatorship.

Consider a few examples of the voting difference between the bipartisan Gingrich GOP and the partisan Pelosi Big Government Socialist Democrats:

Pelosi passed the Infrastructure Investment and Jobs Act on July 1, 2021, with 219 Democrats and two Republicans.

In June 1997, we passed the Balanced Budget Act with 219 Republicans and 51 Democrats.

In 1995, we passed deeply complicated telecommunications reform with 208 Republicans and 97 Democrats. Last year, Pelosi rammed through an emergency appropriations bill with 213 Democrats and, again, zero Republicans.

Also, when I was Speaker in 1996, all 13 appropriations bills were debated and passed well before the Sept. 30 deadline. Under Pelosi, there is almost always a last-moment scramble to pass a giant, unwieldly, little-debated omnibus spending package to avoid shutting down the government.

If you go to our site, you will see this pattern repeated. The Pelosi Big Government Socialists consistently sacrifice bipartisanship and opportunities to work with Republicans in favor of pushing through radical legislation designed to profoundly change America – even with the narrowest possible margins.

There is a profound reason for the extraordinary difference in the two approaches. I was deeply influenced by working with candidate and then President Ronald Reagan. As Tom Evans reports in his brilliantly insightful book “The Education of Ronald Reagan,” the future president had learned from his years working at General Electric that successful leaders have to pay careful attention to public opinion – and must be able to appeal openly to the grassroots to convince the Congress to pass reforms.

When I was Speaker, Republicans could pass legislation under regular order, out in the open –relying on healthy hearings, markups and amendments – because we consistently tried to do what the American people wanted (every initiative in the Contract with America had 70 percent or more approval).

Conversely, Pelosi, Biden, and the Big Government Socialists are trying to force radical ideas, destructive programs, and in some cases insanely dumb laws down the throats of the American people. (Consider free crack pipes for the inner city, replacing the term mother with birthing persons, having white children apologize to Black children in school, letting people sneak into the country with no COVID-19 or law enforcement scrutiny, abolishing identification requirements for voting, etc.)

Speaker Pelosi knows an open legislative process would draw attention to just how weird her members are becoming – and would arouse a wave of opposition to most of what they are trying to do.

Commentators ought to look at the history of real bipartisanship and publicly supported legislative reforms that were passed when I was Speaker. They should also seriously look at the scale of partisanship and dictatorial control under Pelosi and be honest about who has made the House sick.