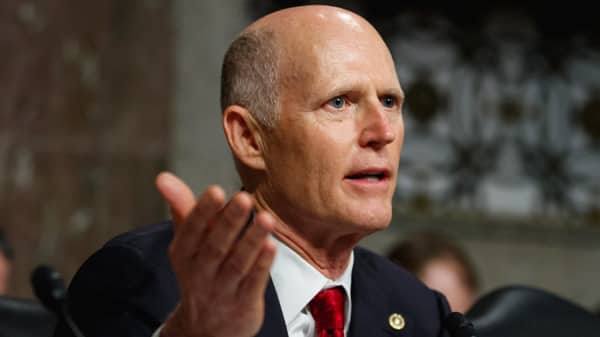 Senator Rick Scott’s “My Plan to Rescue America” sets the stage for a real choice of which future Americans want their country to achieve.

Today Senator Rick Scott released “My Plan to Rescue America.” This is a proposal which sets the stage for a real choice of which future Americans want their country to achieve.

I strongly endorse the direction Sen. Scott is taking in the Senate, and that Leader Kevin McCarthy is taking in the House. Both men understand that a political party has to stand for something and not simply campaign against the other side.

Sen. Scott warned that “”We won’t stop the woke socialist crowd and turn this country around without a plan.”

If Republicans simply win a performance election in which people conclude that the Democrats are incompetent but not necessarily wrong, then the country will continue to drift toward a disastrous Big Government Socialist woke future which will inevitably cripple our future.

“I agree with Mitch McConnell that the election’s mostly going to be about the Biden agenda. But I believe in having plans, and I’m putting this out.”

Scott warned that “if Republicans return to Washington’s business as usual, if we have no bigger plan than to be a speed bump on the road to America’s collapse, we don’t deserve to govern. We must resolve to aim higher than the Republican Congresses that came before us.”

Scott’s approach is similar to the Commitment to America which Leader McCarthy used in the 2020 election for House Republicans. McCarthy’s positive approach was a significant factor in shocking the so-called election experts in 2020. They had predicted a 25-seat House Republican loss. But with McCarthy’s leadership and tremendous effort recruiting good candidates, the House GOP gained 15 seats. That is an impressive swing.

Sen. Scott is following a similar path to the one in 1994, which led to the Contract with America and the first House Republican majority in 40 years.

Scott has developed an 11-point plan with 128 specific policy ideas to Rescue America. Among many other things, the plan calls for:

I find this kind of idea leadership exciting and encouraging.

We must win two arguments to really start turning America around.

First, we must win the performance argument that with gasoline prices, food prices, inflation, a disaster on the border, skyrocketing murder and robbery rates, a weak and dangerous foreign policy, and a host of other failures, the Democrats have failed and need to be replaced. That argument will be easy to win as the failures become more obvious.

Second, we must win the argument that these failures are more than just a function of performance, the ideas themselves are hopelessly wrong. We must convince people that Big Government Socialism and woke policies simply do not work in the real world.

Sen. Scott has made a significant contribution toward winning those two arguments. He has also set the stage for debating those Republicans who want a purely negative campaign. They might win the election, but they will lose historically and fail to set the right stage for 2024.

Between Scott and McCarthy, we have the beginning of a much healthier and more positive problem-solving GOP.