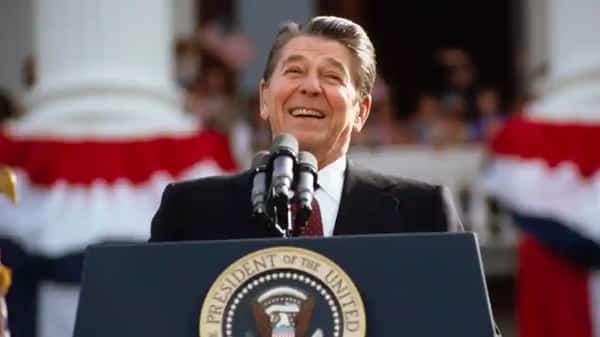 How would President Ronald Reagan have dealt with Vladimir Putin and the threat to Ukrainian independence?

This is the question which came to mind when Callista and I had the privilege of speaking at the Reagan Library on Thursday.

Callista spoke on the remarkably powerful relationship between President Reagan and Pope John Paul II – and their alliance to defeat the Soviet Union.

I had a conversation with John Heubusch, director of the Reagan Presidential Foundation. We focused a great deal on Reagan’s principles for national security and how he would have responded to the challenge of Putin in Ukraine.

Reagan had strategic sense. He had an ability to plan – and execute the plan. He was honest with the American people, our allies, and adversaries. Reagan’s calm, steady determination to shape history and defeat the hostile Soviet Union stands in alarming contrast to the Biden administration’s pathetic, floundering confusion and dishonesty.

Let me be clear: President Joe Biden’s failure is not a question of his and his team’s behavior this week. It is not a function of an embarrassingly weak and ineffective press conference.

The Biden team has been worried about Putin and Ukraine for at least 10 months. These lost 10 months are a national disgrace, and Reagan would have used them to block any Russian invasion of Ukraine without involving American forces.

Look at the origins of the Russian threat 10 months ago.

On April 8, 2021, White House Press Secretary Jen Psaki said that the United States “is increasingly concerned by recent escalating Russian aggressions in eastern Ukraine, including Russian troop movements on Ukraine’s border.” She added that “Russia now has more troops than at any time since 2014.” In the preceding week, five Ukrainian soldiers had been killed.

A few days later, on April 13, 2021, President Biden had a call with Putin. As the White House reported:

“President Biden emphasized the United States’ unwavering commitment to Ukraine’s sovereignty and territorial integrity. The President voiced our concerns over the sudden Russian military build-up in occupied Crimea and on Ukraine’s borders and called on Russia to de-escalate tensions.”

Having watched Biden dither, whine, plead, warn all of us about an imminent Russian invasion of Ukraine, and threaten sanctions that clearly will have no impact on Putin, you must wonder what President Biden thought the words “unwavering commitment to Ukraine’s sovereignty and territorial integrity” meant.

First, he would have pushed aggressively on energy independence to drive down the price of oil and strip Putin of most of the billion dollars-a-day he is earning from high priced oil. Biden’s exempting oil from the sanctions makes the rest of the sanctions laughable from Putin’s income stream.

“The price of oil has fallen from the $36 a barrel of 1981 to about $12 a barrel today. The price of gas has also plummeted from an average of $1.25 a gallon when I took office to about 82 cents today. In fact, the price of gas is now cheaper in real terms, meaning accounting for inflation, than it’s been at any point since the 1950’s.”

The two-thirds drop in the price of oil was a deliberate strategy by Reagan to defund Mikhail Gorbachev’s Soviet economy – and it worked. It also gave the American people a real bargain at the gas pump. Compare this with the Biden policy of crippling American oil and gas production, killing American jobs, making America dependent on Russian oil, and enriching Putin all in one disastrous policy.

Next, Reagan would have deregulated building liquified natural gas ports and worked overtime to export American natural gas to Europe to eliminate the European need to rely on Russian natural gas. It would have created American jobs, improved the American balance of payments, weakened the Russian economy, and eliminated Putin’s leverage over the Germans and other Western Europeans.

Just as he did in Afghanistan, Nicaragua, and other conflict zones, Reagan would have strengthened Ukraine’s military without committing American forces. He would have maximized turning over sophisticated anti-tank, anti-helicopter, and anti-aircraft weapons to the Ukrainian military. He would have also subsidized training teams of former military from western countries to help Ukrainians learn to be effective in defending their country. If Ukraine were a porcupine that was too expensive to swallow, there would be no Russian bear trying to eat it.

Reagan would have moved sophisticated equipment in significant numbers into the Eastern European parts of NATO. He would have made clear that our ability to defeat the Russian military if needed would be overwhelming – including in the Mediterranean and the Arctic, where American space, naval and Air Force assets could be brought to bear in force.

Reagan would have called for a significant increase in the defense budget to build up our forces to return to the two-war model we had maintained for years. He would have understood that Putin moving on Ukraine might tempt Xi Jinping to move on Taiwan, and he would have called for a significant build up to create overwhelming American capacity to defend our interests in multiple regions simultaneously. (This would likely in excess of $250 billion a year given what he did with the Jimmy Carter defense budgets.)

Given his fascination with space-based missile defense – and his lifelong understanding of technological progress – Reagan would have called for national efforts in space, cyber capabilities, and artificial intelligence to overmatch all our competitors combined. The boldness of his Star Wars (Strategic Defense Initiative) speech on March 23, 1983 is clear proof of how bold Reagan would have been in overmatching Russia and China in technological national security investments.

Over the 10 months, Reagan would have undertaken a series of speeches to the American people and in key NATO countries explaining the Putin threat to the entire structure of peace. He would have clearly illustrated why naked aggression by a great power against its weaker neighbors cannot be tolerated. He would have worked to get – in advance – public commitments to undertake penalties against Russia at each stage of its buildup, so the pain would have begun in April or May of 2021 and already been undermining and crippling Putin’s control of Russia – much less Ukraine – by now.

By contrast with this kind of methodical preemptive effort by Reagan (all can be found in his presidency and simply reflect on what he actually did) Biden’s weakness is pathetic. In the middle of Russia bombing Kiev, and Russian special forces apparently entering Ukraine’s capital, Biden responded when pressed by the news media that “no one expected the sanctions to prevent anything from happening” in Ukraine. He went on to say when pressed about the effectiveness of the sanctions, “Let’s have a conversation in another month or so to see if they’re working.”

It is impossible to imagine Reagan adopting a wait-a-month attitude when people are being killed every hour by Russian forces in Ukraine.

The heartlessness, fecklessness, and thoughtlessness of Biden and his team could hardly have been made clearer.

Yes, there was an alternative to the current disaster. We know it is true because we lived through it in the 1980s when we defeated the Soviet Empire without a war.