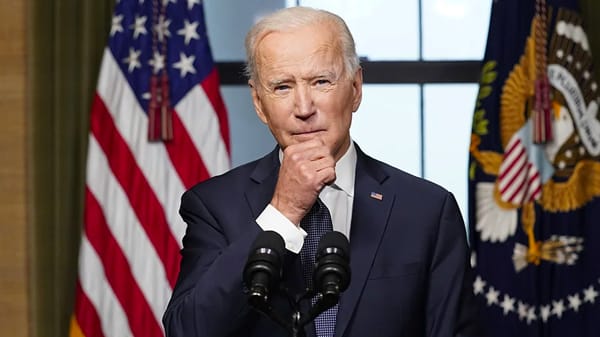 Faced with a collapse in public support, can President Biden move away from his failed policies and minimize the looming disaster for Democrats in the fall elections?

As you watch President Joe Biden’s first State of the Union, there are a number of things to keep in mind.

I write this note with vivid memories of President Bill Clinton’s comeback State of the Union in January 1996. Clinton knew he was in trouble with the American people. He knew that if he stayed too far to the left to make his most ardent supporters happy, he would lose his re-election campaign. In fact, after a long stretch of thinking about the Republican landslide and the Contract with America, Clinton decided to break with the left and run as a centrist.

In moving to the center President Clinton, was following a strategy developed by his consultant Dick Morris. Morris described this new approach as “triangulation.” According to Morris, if Clinton triangulated between the Republicans on the right and the Democrats on the left, he would be seen as a centrist. Of course, the leftwing Democrats who wanted him to be their champion and advocate hated this strategy. They wanted a liberal Democratic President who would fight for their values even if it alienated the American people and cost him the election.

I knew the general direction President Clinton was going to take to win re-election. Nonetheless I was surprised when he came into the House Chamber for the 1996 State of the Union. That was the evening when Clinton announced, “the era of big government is over.”

Whether he truly meant it or not, the idea was so attractive and compelling that as his host sitting behind him on the dais, I had to give him a standing ovation. He had just set the stage to sign welfare reform, the largest capital gains tax cut in history, Medicare reform and four consecutive balanced budgets.

The left never forgave Clinton for selling out their values to get reelected. In fact, two decades later it would be a major problem for Hillary Clinton in trying to win the presidency on her own.

Biden is in worse shape than Clinton was in 1996. According to Quinnipiac only 37 percent of Americans approve of Biden’s performance while 56 percent disapprove. Similarly, the Post-ABC poll shows Biden at 37 percent approval with 61 percent of independents disapproving.

Biden’s problems are carrying over to the Congressional Democrats who according to Emerson are now losing by 9 percent to House Republicans on the generic ballot. That is a margin which could lead to the largest House Republican majority since 1920.

It isn’t just Biden who is getting strong negatives from the American people. A majority of Americans consider Biden’s first year “a failure.” Some 58 percent say the state of the union is worse today than it was a year ago.

Faced with this collapse in public support, Biden ought to be following President Clinton’s lead in moving away from his failed policies and trying to create a new beginning to minimize the disaster which looms in the fall elections.

My bet is he simply can’t move to the center. He fears the hostility of the left more than defeat.

His appointees are so radical and out of touch with reality they would rather lose than give up on “the true faith.”

Here are a few test questions:

Can he break with the radical greens and reopen the American oil and gas industry to bring down prices, fight inflation, create a liquified natural gas system for Europe to wean them off Russia, and create American jobs?

Can he admit that having 2.5 million people crossing the border illegally in his first year is just unsustainable?

Can he side with the right of parents to know what is being taught to their children?

Can he call for a dramatically bigger defense budget to cope with both Russia and China at the same time?

Can he condemn the George Soros-funded leftwing district attorneys who have been releasing prisoners and refusing to protect the public as murders, rapes, robberies and car jackings increase?

Can he admit that the current inflation rate is hurting working and retired Americans and call for a dramatic reduction in federal spending to reduce the inflation rate?

Can he admit that the government bureaucracies are so incompetent billions and billions of dollars are being stolen – and call for a dramatic overhaul of the bureaucracies?

Can he admit that government regulations and union work rules are a major part of the logistics supply chain problem and call for reform of both?

You can keep score during the State of the Union and decide for yourself if President Biden is clinging to the left – no matter the cost – or following President Clinton down the path of moderation.

I know what my bet is, and it isn’t the latter.