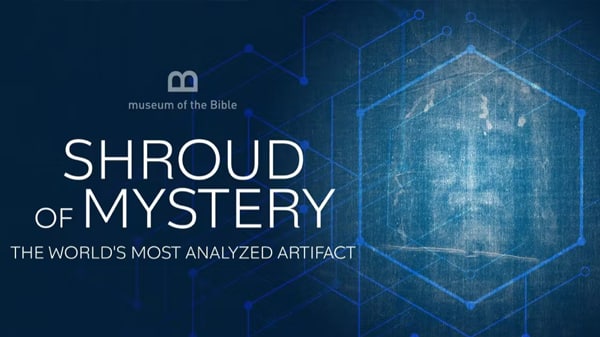 On Saturday, February 26, the Museum of the Bible in Washington, D.C. opened an exhibition titled Mystery and Faith: The Shroud of Turin.

Michael Warsaw, CEO of EWTN, described the importance of this exhibit and said, “Few people will have the opportunity to visit Turin and see the actual Shroud. With its detailed and high-tech facsimile of the Shroud, the Museum of the Bible’s exhibit makes an encounter with one of the great artifacts in human history possible for everyone.”

As National Geographic described in 1980, the Shroud of Turin is “One of the most perplexing enigmas of modern times.”

A roughly 14-foot-long, 3-foot-6-inch-wide linen burial cloth, the Shroud bears the image of a man who was crucified with bloodstains that match the patterns of the wounds of Jesus’s crucifixion recorded in all four Gospels. As Saint John Paul II said, the “Shroud is a mirror of the Gospel.”

Among the numerous marks on the Shroud of Turin, viewers can see blood stains from scourge marks (Mark 15:15), punctures from a crown of thorns (Matthew 27:29), and blood from a side wound (John 19:34).

Throughout the centuries, the Shroud has been venerated by pilgrims from around the world and criticized for its authenticity.  The lack of continuity within the historical record of the whereabouts of the Shroud before 1356 has led some critics to claim that it is the work of a medieval artist.  But as historians will note, the absence of evidence does not prove that it does not exist.

It wasn’t until 1993, for example, that the Hungarian Pray Manuscript, also known as the Pray Codex, was discovered.  This collection of medieval manuscripts traces the historical trail of the Shroud to at least the year 544.  Within the manuscript, there are illustrations of a man with his arms folded across his pelvis and thumbs turned inward (consistent with injuries caused by nails severing the median nerve) being wrapped in a burial cloth with the same distinctive three-hop herringbone weave and burn holes in a similar “L” shaped pattern as those on the Shroud.

Similar to new discoveries made by historians, scientists who have studied the Shroud of Turin will also note that the advancement of technology throughout the centuries has unlocked even more mysteries and unanswered questions.

In 1898, the Shroud was photographed for the first time by Secondo Pia during its public exhibition in Turin, Italy. (The Shroud was moved to Turin in 1578, which is where its name is derived.)  While in the darkroom, Secondo Pia discovered that the “negative” image that was developing was in fact, a “positive image.”  This means that the image on the Shroud itself – which is brown in color – is a photographic negative. In short, a photographic negative image of the Shroud is actually a positive image.  This discovery baffled scientists for decades and it wasn’t until 1931, with the development of more advanced film technology, that Pia’s unexplained findings were confirmed.

In more recent years, how the image appeared on the Shroud of Turin has been the focus of scientific inquiry.  In 1978, after the Shroud came off of its first exhibition since 1933, a team of 24 scientists, known as the Shroud of Turin Research Project (STURP), studied the Shroud for 122 hours, or five days.  They performed numerous tests including particle, chemical, and blood analyses.

After three years of analyzing their results, the STURP team concluded in 1981, “There are no chemical or physical methods known which can account for the totality of the image, nor can any combination of physical, chemical, biological, or medical circumstances explain the image adequately.  We can conclude for now that the Shroud image is that of a real human form of a scourged, crucified man. It is not the product of an artist.  The blood stains are composed of hemoglobin and also give a positive test for serum albumin.”

Critics of the authenticity of the Shroud of Turin often point to the results of the 1988 radiocarbon dating – which is the most significant argument against the Shroud’s authenticity and dated the icon to 1260-1390 AD, more than a millennium after the time of Jesus, with a 95 percent certainty.  But there have since been discoveries and developments that call the accuracy of the radiocarbon analysis into question.

First, there was the discovery of the Pray Codex, which contains images dating back to 1192-1195, after the testing took place.  Second, the samples were taken from an upper corner of the Shroud of Turin (which is depicted in historical images as the corner touched and held by people since the time the Shroud was first recorded to be on display in 1356).  Additionally, the three samples that were tested were cut from one larger fragment of the corner.  This calls into question the contamination of the samples and introduces systemic bias into the testing since the upper corner could have very well been a medieval repair.

Later analysis in 2004 using samples from the 1988 inquiry and threads from the rest of the Shroud found that the samples did not match.  Thermal Chemist, Ray Rogers, concluded in a peer-reviewed journal, “The radiocarbon sample was not part of the original cloth of the Shroud of Turin.  The radiocarbon date was thus not valid for determining the true age of the Shroud.”

Lastly, the institutions participating in the 1988 radiocarbon analysis never released the raw data.  It wasn’t until 2017 that the British Museum, which centralized the data, released the information at the behest of a legal request.  In 2019, researchers concluded, “A statistical analysis [of the published radiocarbon findings] and the raw data strongly suggests that homogeneity is lacking in the data and that the procedure should be reconsidered.”

At the Museum of the Bible’s Mystery and Faith exhibit, viewers will explore the complicated history of the Shroud of Turin, learn about the criticisms and disputes surrounding its authenticity, and recognize the impact it has had on the 10 million pilgrims in the 21st century – and those throughout the millennia — who have stood in its midst.

As Myra Adams, founder of SignFromGod.org, wrote, “One does not need faith to visit. And those without faith should consider why a prestigious museum in Washington D.C. is hosting an exhibition about what some think is a controversial medieval forgery.”

At the end of the exhibit, there is a room called the “Reflect and Respond” room, where viewers are encouraged to determine for themselves what the Shroud means and represents to them.  Audiences are prompted with the question, “Who Do You Say That I Am?” from the Gospel of Mark.

We encourage you to see this special exhibition, on display until July 31 and discover the mystery of the Shroud of Turin.