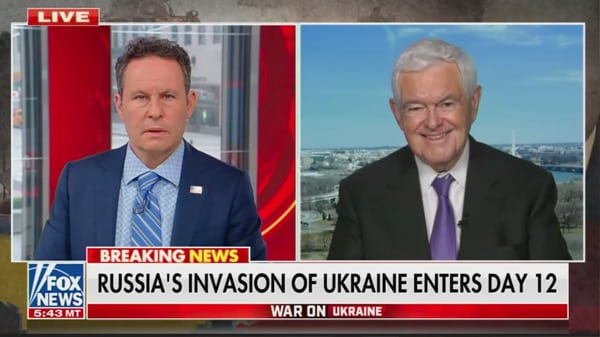 Newt warns that President Biden’s deterrence will fail in Taiwan and of the troubling insanity of restarting the Iran nuclear deal.

He’s exactly right on both count. First of all, President Biden first talked about the danger of Russia invading Ukraine in April of last year so they had 10 months when they could have built under the Ukrainian military, created what admiral has called a porcupine strategy which is what he has recommended for Taiwan. Make it so powerful, so expensive to try to conquer that it’s just not worth the effort. I would say one, they ought to apply that right now to Taiwan and they should be rushing to Taiwan all the equipment that they would try to get to them later on if the communist invaded. Remember, Xi Jinping is fully as tough as Putin. I mean look at him in Hong Kong, in Tibet, in western China with the Uighurs, this is a very tough guy. I think we need to prove that we’re prepared to defend Taiwan not just talk about it. In addition, the insanity of the Biden administration first of all in allowing the Russians to be involved in negotiating with Iran at a time when we are trying to isolate Russia. It’s going to lead to insane deal in which the leading terrorist country in the world is given money by the U.S. in order to be able to pay for terrorism in the U.S. You have to wonder where are the Biden people psychologically in reality? Second, why does Biden want to appeal to Venezuela, which is a communist dictatorship. To Saudi Arabia which is a monarch dictatorship. But he’s against Oklahoma, Pennsylvania, Texas, et cetera. There is an anti-American pattern to this administration that is really weird.

Well, I mean I worry about any kind of no-fly zone because in the end, it means you are shooting down Russian aircraft. And I think once you start — we went through the whole cold war and we were pretty careful on both sides, Russians didn’t kill Americans, Americans didn’t kill Russians even though at the margins things went on, but we never got into a direct overt fight like that. They got 6,000 nuclear weapons. And I think it’s a lot better to crowd Putin day after day. I think there is a brand-new book out by Herman Pirchner called Post Putin and it walks through the ways in which Putin could disappear. And I think the longer this fight goes on in Ukraine, the weaker Putin is going to get back home. There is an amazing new tweeted out of a Russian POW talking about the fact that he thought they were coming to Ukraine as saviors. He had no idea. I think Putin is in danger and we ought to maximize the pressure on him but not do it in a way that leads to World War III.