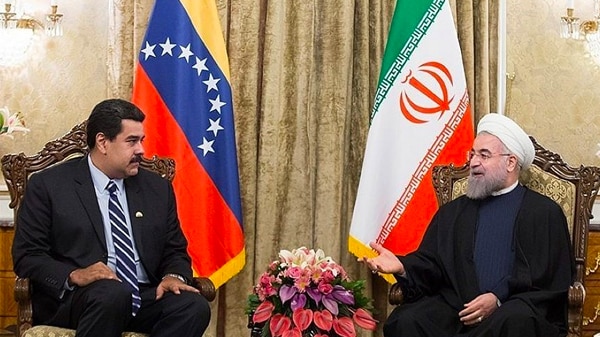 As you watch the Biden administration fail, ask yourself: “why Venezuela and not Texas? Why Iran and not Canada? Just how unwilling is the Biden team to help you and your fellow Americans?”

When the Biden administration appeals to Iran, Venezuela, and Saudi Arabia for oil but rejects American and Canadian oil and gas production, there is something profoundly wrong.

Why does Joe Biden think dictators are better than Americans? Why send money to Iran instead of Oklahoma – or to Venezuela instead of Texas? If he wants to send money outside the United States, why not send money to Canada rather than Saudi Arabia?

Biden’s opposition to American oil and gas, is killing jobs, weakening our national security, endangering our allies, and stopping the United States from earning foreign exchange.

There is a huge national security issue in terms of the Russian invasion of Ukraine and the general aggressiveness of Vladimir Putin. The price of oil has jumped from $46 a barrel when Trump left office to $123 a barrel as I write this column. So, Putin is making more than $1 billion a day from the sale of oil and gas. This gives him the money to finance his military adventures in Ukraine, Syria, and elsewhere. The lower the price of oil and gas gets; the less money Putin has to finance his belligerence and military modernization.

Putin is warning Western Europe that he may cut off the natural gas supply, which would have a huge impact on jobs and the quality of life there. This poses a potentially huge economic and political threat to Germany and other NATO countries.

The correct American strategy would be to maximize the production of American oil and gas, so we can drive down the price of energy. By emphasizing American production, we would create jobs in the oil patch (which for natural gas includes Pennsylvania, West Virginia, Ohio, and more traditional producing states). This could even include New York if the liberal politicians did not ban fracking and thereby reduce the income of New York farmers and landowners.

Furthermore, the right strategy would include a massive increase in liquid natural gas production, so American gas could replace Russian gas in Western Europe. This would be good for European independence from Russian pressure and create American jobs. A decision to return to American energy independence would lower the price of gasoline, make the Ukraine war far more expensive for Russia, and bring relief to many millions of Americans.

The Biden team thinks we are so dumb they can blame the boycott of Russian oil for the high cost of gasoline and heating oil. They expect us to ignore the degree to which they have crippled American energy production. The fact is the nuttier arm of the Big Government Socialist Biden team would like to eliminate all oil and gas production. The leftwing fantasy of a gasoline-free future was recently captured by Secretary of Transportation Pete Buttigieg when he said:

“Clean transportation can bring significant cost savings for the American people as well. Last month we announced a $5 billion investment to build out a nationwide electric vehicle charging network so the people from rural to suburban to urban communities can all benefit from the gas savings of driving an EV.”

Marie Antoinette said of hungry Parisians, “let them eat cake.” Now, the Biden administration tells cash poor Americans, “buy an electric car.” Of course, as President Biden did in the State of the Union, the administration can’t say “buy a Tesla,” because Tesla is a non-union company. The Biden team feels loyalty toward the United Auto Workers – not the American people. Biden could only mention Ford and General Motors, because none of the other American auto companies have UAW memberships (Dodge is owned by Stellantis, which is headquartered in the Netherlands).

The idea that working and retired Americans who are struggling to pay $4.50 a gallon (and even more in some places) should shell out tens of thousands of dollars for an electric car shows just how out-of-touch with reality the Biden team is. Furthermore, note that Buttigieg was not suggesting buy a car tomorrow. He was suggesting that a $5 billion investment in an electric vehicle charging network (which will take years to build) was the answer to high priced gasoline today.

The Biden team is blissfully ignoring our energy problems, Ukraine, Iran, rising crime, chaos at the border, unemployment, ballooning inflation – the list goes on. Unfortunately, for most Americans, the world Biden is creating is expensive and does not work.

As you watch the Biden administration fail, ask yourself: “why Venezuela and not Texas? Why Iran and not Canada? Just how unwilling are they to help America?”

Every time you go to the gas station, remember it is Biden’s policies – and not bad luck or Putin’s aggression – which is costing you so much to fill up your car.

Then ask your members of the House and Senate to override Biden’s insanity on energy and return us to an American energy policy.