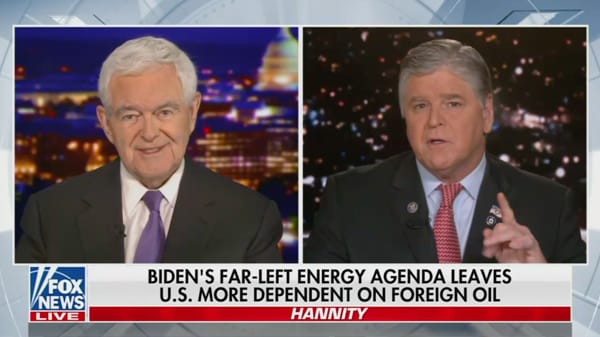 Newt and Sean discuss how Congress has to pick up the responsibility to help out Americans where President Biden and his administration are failing.

I’m going to say, first of all, your conversation earlier with the congressman McCarthy was really important. Congress has a responsibility here. Congress should step in and literally make it impossible to spend any money implementing an agreement with Iran that is being, by the way, negotiated by the Russians in the middle of our condemning them for invading Ukraine. This whole thing is crazy. Second, congress ought to pass a law repealing all of the Biden anti-American energy provisions and establishing a very aggressive liquefied national gas program to help Europe get away from the Russians by giving them an alternative. Third, we should make sure that all the weapons the Ukrainians need gets to them. And fourth, we ought to declare that war crimes and treaties really matter. We are watching war crimes, and there absolutely should be a commitment that we want to go after Putin and his key people, because they are ordering, deliberately war crimes, including the killing of children, the killing of women, the attacking of nuclear reactors. I mean, we live in a world that is lawless, and the most vicious and most evil people dominate, or we live in a world where the rule of law prevails and there are boundaries, and when you step beyond those boundaries, you suffer significant consequences. But in terms of the administration’s policies, let me say first of all, I think it is a pathology. I think these people are nuts. I think that they are basically anti-American. The idea that you would say, Venezuela’s fine, Iran is fine, Saudi Arabia is fine, but now Texas, Pennsylvania, Ohio, Oklahoma, boy, they are dangerous. You have to say to yourself, this is a psychological problem in the democratic party that they actually dislike their own country so much that they would rather buy oil from dictators, like the murderer who is in charge of Venezuela, or the Iranians who lead the leading terrorist organization in the world rather than from Americans. I mean, it is truly crazy. I think it is the craziest thing since Buchanan allowed the south to take over federal arsenals in 1860. This is a remarkably anti-American policy.

First of all, the courage — I rode a recent piece on the bear, the lion, and the bunny rabbit. The bear is the Russians just as they have under Reagan. The lions have turned out, to everyone’s shock, to be Ukrainians. And the bunny rabbit is sitting in the white house being pathetic. The Ukrainians have proven, if we will get them the right weapons, they are going to beat the Russians. They are not going to fight to a tie. They’re going to beat them and drive them out of the country. Putin cannot stand six months or a year of losing troops, having recently a major general shot by a sniper. The other day, 30 Russian tanks were surrendered in one day to Ukrainians. Our job is, get them the equipment, figure out a way to get them the mig 29’s. Get the lawyers subject too much, and send them home, or offer them a chance to join the Ukrainian international brigade. Announce that Americans can go and serve as volunteers as we did in China for example against the Japanese, I think there are more enough people willing to fight, and they just need the equipment to do it.