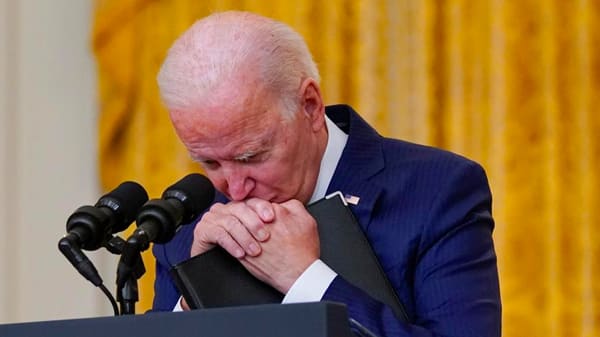 The rest of the world is watching the Biden administration’s inability to defend American interests, and we must expect more aggressive actions over the next few years. Weakness begets more aggression.

There are several lessons to be learned from the opening phase of Putin’s invasion of Ukraine.

First, Putin is being brutal, using terror tactics, and targeting civilians precisely as he did in the Chechnyan War and in Syria. Nothing he is doing is new. If he uses chemical weapons to terrorize civilians in Ukraine, it will be precisely what he did in Syria. The timidity then-President Barack Obama showed in Syria is the same timidity President Joe Biden is now showing in Ukraine.

When war crimes are ignored or downplayed, it increases the likelihood the aggressor will use more violent war crimes. Putin got away with war crimes in Chechnya. Then he got away with more war crimes in Syria. Now he is killing pregnant women in maternity hospitals, targeting civilians with terror weapons, threatening chemical attacks on civilians, attacking nuclear reactors, and generally acting without regard for the laws of war – or the efforts of civilized countries to constrain violence in war. The West occasionally uses words to condemn horrendous acts of violence but generally hides from the reality of Russian war crimes under Putin’s regime.

We have also learned that people will fight heroically for their freedom. Whether in Chechnya, Syria, or Ukraine, people show great courage and endure terrible casualties to defend their freedom. This is despite the weakness and failure of prosperous Western democracies to effectively support them.

Other dictators are watching the West’s timidity and ineffectiveness and are learning that having nuclear weapons offers great protection for aggression. There will be many countries seeking nuclear weapons after watching Putin use the threat of nuclear war to intimidate President Biden (who has openly expressed his unwillingness to risk Putin’s retaliation for implementing a no-fly zone or transferring 24 MiG 29 aircraft to the Ukrainians).

We have learned to never send Vice President Kamala Harris on a serious trip overseas. The video of her laughing when asked about Ukrainian refugees is the embarrassing and humiliating thing I can remember any American official overseas doing in my lifetime. She is simply incompetent and should be kept off television.

We have, again, seen that deterrence based on words and diplomacy is unreliable when dealing with dictators. Only strength matters. President Biden first talked about Putin’s threat to Ukraine in April 2021. He had 10 months to strengthen Ukraine’s military, provide the necessary equipment and provide training when Putin could not have effectively objected. Whether with North Korea, Iran, Russia, China, or other dictatorships, strength matters more than words. If they think they can’t win, they turn to diplomacy. If they think they can win, diplomacy is replaced with war.

Endangered countries need to be turned into porcupines so well equipped, trained, and mobilized that they cannot be invaded except at enormous cost. This is the lesson of Swiss and Swedish armed neutrality. They survive because they are simply too well prepared to be invaded except with enormous losses to the invader.

So, the Biden administration should be rushing equipment to Taiwan now. The time to prepare is before a potential invasion. Talking with Xi Jinping is a much less reliable strategy than preparing people to defend themselves and make the cost of an invasion prohibitive. The people of Hong Kong, Tibet, and eastern China can educate the Biden administration about the risks of relying on Xi’s word.

Again, we’ve learned the proliferation of nuclear weapons and the continued rise of aggressive dictators will require us to add defense to deterrence as a strategy. We are today almost totally unprepared to survive a nuclear or electromagnetic pulse attack. We rely on deterring aggression, and yet the lesson of Afghanistan, Syria, and Ukraine is that you must be prepared for deterrence to fail. The United States today has no doctrine for defense, and we would have an almost impossible challenge to deal with a nuclear or EMP attack under current circumstances.

As the Biden administration behaves with timidity and cowardice, our enemies bully us. The current spectacle of Biden administration weakness is astonishing. The Russians are leading the negotiation with Iran while invading and committing war crimes in Ukraine. The Iranians have assassins in the United States trying to kill government officials – and Iran is firing missiles into Iraq – while the Biden team seeks to appease the dictatorship. The rest of the world is watching the Biden administration’s inability to defend American interests, and we must expect more aggressive actions over the next few years. Weakness begets more aggression.

The economic consequences of Putin’s attack on Ukraine will be horrendous. Millions may die of famine, desperation-born violence, and starvation as the price of food skyrockets. Ukraine is a major producer of wheat, and its absence will lead to enormous cost increases for poor countries across the globe.

Finally, everything we are watching is history – not politics. Putin’s invasion of Ukraine is the end of the post-war system, which enabled most of the world to live in peace and seek prosperity. The United States will have to profoundly rethink its strategies to survive with minimum violence in an increasingly dangerous world.

All Americans of every ideology and partisan loyalty need to think as Americans about how we adjust our efforts to protect America in what will become a much more violent and dangerous world.