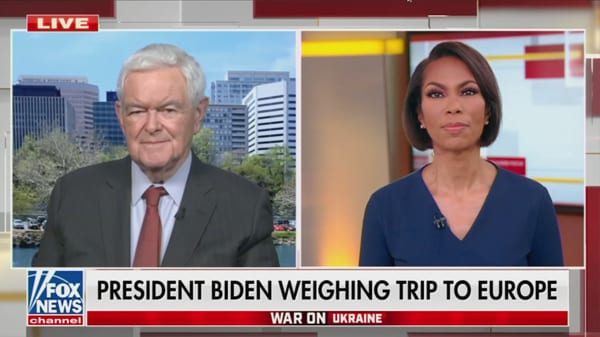 It’s pretty straightforward. Putin is evil. He has been consistently evil going back to the Chechnya war in the late 90s to the war in Syria. He consistently killed civilians. He uses chemical weapons. He is not going to be stopped until he is stopped. And the democracies are all intimidated. The fact is instead of arguing about it, why aren’t we seeing aircraft land with antiaircraft systems? Why are we seeing MiG 29’s flown in? Why aren’t we seeing a deliberate effort to cut off the Syrians? We don’t have to tolerate 40,000 Syrians, if that number is real, leaving Syria going all the way to Russia. We can simply assert that we are not going to allow them to fly and they’re not going to allow them to go by ship. We have the capacity to do that. What you see is cowardice, confusion, incompetence. When secretary of state Blinken says we are giving a green light and a couple of days later the Pentagon says no we are not giving a green light, it’s pathetic. People are dying every day while the democracies bicker, complain, and talk. Putin can be defeated. He has to be defeated. He’s going to grow more evil the longer he succeeds. We ought to recognize just how bad he really is.

We should know after Afghanistan, this is the most timid, cowardly, empathetic administration in modern American history. They aren’t any words to express it. If we watch in Europe, it was an embarrassment to have that person represent the United States because she is so totally utterly incompetent. I think the Europeans have taken our measure. I don’t think anybody in Europe looks to the United States to provide leadership of any type. And I think that Biden is meeting the standard. He’s not providing any leadership of any kind. We have enormous capability and many competent people. If they were unleashed, we would in fact end up defeating Putin and he would end up being driven out of power by his own government. But instead, we are intimidated by him, and we are allowing him to get away with war crimes. These are all war crimes. Targeting a maternity hospital, killing women and children. Targeting nuclear reactors. All of these things are war crimes. But that’s typical. He committed war crimes in Syria and war crimes in Chechnya. Why would we think he’s any different now? He committed a war crime in Great Britain tracking down and killing a Russian dissident in Great Britain. Doing so deliberately so we note that the Russians did it. It is beyond words if you are a serious person to try and describe what a complete utter embarrassing failure Biden is.

It to the president of the United States is.