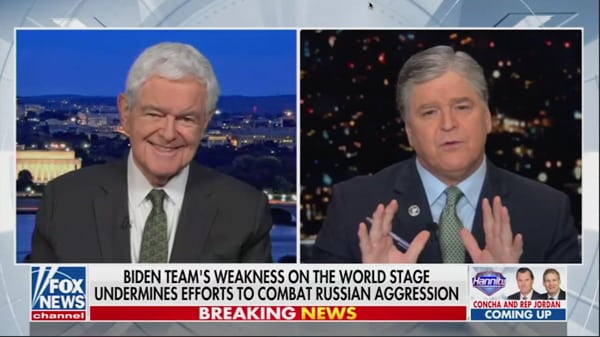 I think that’s right. I mean Chamberlain was a very strong political leader who had a strategy. Unfortunately, with a personality like Adolf Hitler, that strategy didn’t work. It’s very bizarre. You have Biden yesterday saying yes, Putin is a war criminal. What does that mean? It means nothing. You have Biden saying we’re going to really cut them off and make the sanctions work, and then we learn from the Free Beacon in Washington that in fact the Biden administration has already promised the Russians that if they can get an Iranian deal, they will waive the sanctions, release $10 billion of Russian construction companies going into Iran. Item after item. It struck me, I just wrote a newsletter on this, but you had Zelensky talking about an immediate, urgent, now crisis and you have Biden talking about months and eventually and sooner or later and you could tell this when Biden spoke two nights ago to the democratic national committee’s fund-raiser and in the entire speech, there’s one sentence about Ukraine and Russia, and that sentence is that if we had more green fuels, things would be better. Now when you can reduce the tragedy that you and I and everyone watching has seen in Ukraine, the viciousness, the war crimes, the brutality, and it gets totally ignored by the president of the United States in his speech, you know that there’s something profoundly wrong with the Biden administration, and frankly whatever is wrong with Biden is 20 times worse with Harris. Harris’ performance and polling was so humiliating to every American to have her laughing when asked about refugees from Ukraine. I would say Harris should never again be allowed to lead the United States, because she is such a continuing embarrassment to the American people, and she brings the United States in disrepute. Nobody in the world thinks this it administration can lead. Nobody in the world is going to rely on the guarantee of Joe Biden, who has consistently lied, lied about Afghanistan, has lied about Ukraine. It’s truly historically a dangerous moment for the United States and frankly for the entire human race.

You just threw three very different questions at me. Let me start with — I think the whole — I think the whole thing about mig 29’s is nuts. If we’re going to put in antiaircraft missiles to shoot down Russian aircraft, if we are going to give them equipment to kill Russian tanks, the fact that we allow Ukrainian pilots to fly Mig 29’s out of Poland or Germany or wherever they come from strikes me as a nonissue. Why would you allow Putin to define what you’re allowed to do? Which is exactly what Joe Biden did. And I think that there is no rational difference. In terms of AOC. Look, her version of climate change is a religious experience. It has nothing to do with reality, nothing to do with facts, and as a religious fanatic in her own right, she can say anything she wants to, because it has to be true, because it’s what her religion told her to say. The fact that it’s not true factually makes no sense to normal people and in fact Native Americans are being punished like everyone else by having to pay vastly too much for gas and oil and natural gas because of the policies of Joe Biden. So, in a sense, the said administration is punishing Native Americans, not protecting them, and helping them. I think that’s how I would frame that.

Sure. Absolutely. The thing that’s frustrating about this administration, whether it’s fighting inflation at home or dealing with crime, or dealing with foreign dangers is we know what works. We’ve lived through it. We lived through it for eight years with Ronald Reagan, we lived through it for four years with Donald Trump. If the price of oil went back to where it was under Trump, we would strip Putin of two-thirds of his daily income. We would cripple him automatically by doing that. The very fact that Biden would rather buy gasoline and oil from Venezuela, which is a dictatorship, Iran, which is a dictatorship, Saudi Arabia is a dictatorship, they are okay to Joe Biden, but now Texas, Oklahoma, Ohio, Pennsylvania, North Dakota, they are really dangerous places. You have to say by any legitimate standard, these people are crazy. This is not about politics. This is not about normal behavior. They’re nuts. They’re out of touch with reality, the world doesn’t work the way they think it’s going to, and frankly, I hope that the new Republican congress in January will look very deeply at for example how wrong our intelligence community has been, how wrong general Milley has been as the worst chairman of the joint chiefs in American history – remember he was wrong about Afghanistan. And then he turned around and said the Russians would be in Kyiv in three days. He and Putin apparently had the same timetable. The Ukrainians didn’t know they were supposed to obey him. So, the Russians still aren’t in Kyiv. That should worry all of us because we have 17 intelligence systems, we spend billions and billions, tens of billions of dollars, and they’re wrong. Now this should lead to far more than just Joe Biden the fundamental reform of the American system, so it works again.