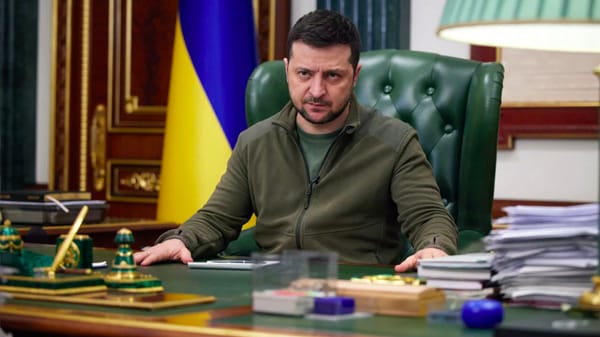 Ukrainians die while Biden talks. It is a humiliating and inexcusable contrast. And it is a deep failure by America to do the right thing.

Read the key parts of the two speeches and see if you don’t agree with me. I am ashamed to have a President of the United States this indifferent to suffering, dishonest about his own impact, and emotionally withdrawn from the painful historic events occurring on his watch.

President Zelenskyy focused on the immediate suffering of the Ukrainian people:

“I’m proud to greet you from Ukraine, from our capital city of Kyiv. A city that is under missile and airstrikes from Russian troops every day, but it doesn’t give up. And we have not even thought about it for a second, just like many other cities and communities in our beautiful country, which found themselves in the worst war since World War II.”

Note the “every day” nature of the attacks.

Note the “right now” nature of the struggle.

“Understand us now, when we need you right now. Remember Pearl Harbor. Terrible morning of Dec. 7, 1941, when your sky was black from the planes attacking you. Just remember it. Remember Sept. the 11th, a terrible day in 2001 when evil tried to turn your cities, independent territories in battlefields. When innocent people were attacked from air, yes, just like no one expected it, you could not stop it. Our country experience the same every day. Right now, in this moment, every night, for three weeks now, various Ukrainian cities of Odesa, Kharkiv, Lviv, Sumy, Mariupol, Zaporzhzhia and Dnipro.”

This is not flowery prose or exaggeration. Zelenskyy truly means “this moment, every night, for three weeks now.” The scale of the attack on civilians has been staggering.

“Russian troops have already fired nearly 1,000 missiles at Ukraine. Countless bombs. They use drones to kill us with precision. This is a terror that Europe has not seen for 80 years, and we are asking for a reply, for an answer to this terror from the whole world. Is this a lot to ask for?”

A few hours later, we watched President Biden decline the challenge – despite praising Zelenskyy and acknowledging Russia’s relentless attacks on civilians are “God awful” and calling them “atrocities” that are “an outrage to the world.”

Instead, Biden outlined the list of military aid the US already committed. Then he began to slide away from the immediate crisis and set the stage for low expectations, saying, “Now I want to be honest with you. This could be a long and difficult battle.”

Of course, “a long and difficult battle” is what Zelenskyy asked Biden to help avoid. “Long and difficult” gives Ukrainian patriots no boost of morale. “Long and difficult” is no encouragement for civilians who have been hit with more than 1,000 missiles, countless bombs, and innumerable artillery rounds. If words were all that mattered, Biden’s speechwriters had the right language. But the speech signaled that Biden planned a long, indirect strategy while Ukrainians are dying in the here and now.

“Together with our allies and partners we will keep up the pressure on Putin’s crumbling economy. Isolating him on the global stage. That’s our goal. Make Putin pay the price, weaken his position while strengthening the hand of Ukrainians on the battlefield and the negotiating table. Together with our allies and partners we will stay the course and will do everything we can to push for and end this tragic and unnecessary war. This is the struggle that pits the appetites of an autocrat against humankind’s desire to be free. And let there be no doubt, no uncertainty, no question America stands with the forces of freedom. We always had and we always will.”

So, Biden “keeps up the pressure,” while Putin drops bombs and fires missiles.

Biden claims to isolate Putin on the world stage, while Putin attacks Children’s hospitals, theaters, and other civilian targets. (One must ask how following the Russian lead in the Iranian negotiation is in anyway isolating.)

Biden stays the course, while Zelenskyy pleads with him to end the course by winning the war.

Biden says he will do “everything we can,” while blocking Ukraine from getting MiG-29 aircraft that could help reclaim the sky.

A perfect example of Biden’s too little, too late approach was his comment that “we have identified and are helping Ukraine acquire additional longer range aircraft systems and ammunitions for those systems.”

The war has been going on for three weeks. Ukrainian civilians – including pregnant women and children – have been getting killed for three weeks. Why weren’t the anti-aircraft systems put place in Ukraine nearly 11 months ago, when the Biden administration acknowledged Russia was planning to invade? Why is there now a delay as people die and cities are destroyed?

Biden’s lack of seriousness about the war was captured in his Democratic National Committee speech a few days earlier, on March 14. As Biden said, “the Russia and Ukraine [war] is another reason why we have to get off our dependency on fossil fuels.”

I am sure Ukrainians were comforted by Biden’s concern that – if they survive the bombings – they will not contribute to global warming.

While he avoids seriously discussing the war, Biden has followed the polls and gotten tougher in describing Putin. Wednesday afternoon he told reporters “Oh, I think he is a war criminal.” This is a throwaway line, which has no meaning.

Then, at the St. Patrick’s Day lunch at the U.S. Capitol, Biden called Putin a “murderous dictator” and “pure thug.” I’m sure Putin’s feelings were hurt.

However, the same day, Andy McCarthy, a respected attorney with great connections to the national security community, confirmed Biden’s tough words were just that – words.

“Some days, you can’t even make it up.

“President Biden has assured Russian despot Vladimir Putin that Biden’s proposed Iran nuclear deal will immunize Moscow from the sanctions the administration otherwise portrays as crushing Moscow for its barbaric, unprovoked war against Ukraine. So Russia will not only reap desperately needed revenue; it will also continue to develop the nuclear program of jihadist Iran.”

“Rosatom, Russia’s leading energy company, has a $10 billion contract with Iran’s atomic energy organization to expand Tehran’s Bushehr nuclear plant. Russia and the Biden administration confirmed on Tuesday that the new nuclear agreement includes carveouts that will waive sanctions on both countries so that Russia can make good on this contract.”

So, the day before Zelenskyy spoke to the American Congress, the American President agreed to a sanctions carve out for Russians.

The Biden national security team has neither honor nor honesty. It is a tragedy for Ukraine, the United States, and the world.