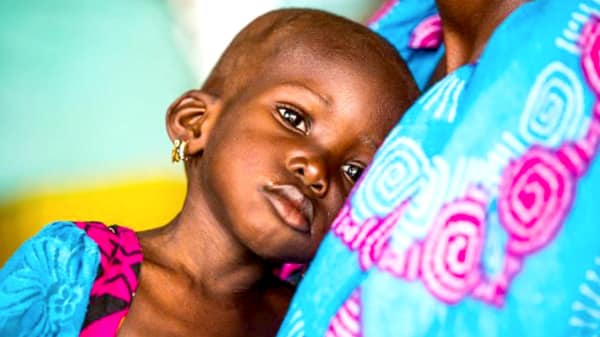 As world hunger persists, Russia’s war on Ukraine will be devastating for people in countries already struggling with food security and poverty.

Before Russia’s invasion of Ukraine, the devastating impacts of global hunger rose significantly during the COVID-19 pandemic.  According to the most recent United Nations’ State of Food Security and Nutrition in the World report, an estimated 9.9 percent of the global population (811 million people) was undernourished in 2020 – an increase from 8.4 percent in 2019.

Of those who were undernourished, more than half lived in Asia, and more than one-third lived in Africa.  In 2020, a total of 21 percent of Africa’s population did not have enough to eat, which was more than double the percentage of people combatting hunger on any other continent.

Russia is the leading exporter of wheat, while Ukraine is the fourth-largest exporter. Together, these countries account for nearly one-third of total wheat exports in the world.

Much of Russia’s and Ukraine’s wheat exports are sent to the Middle East and Africa.

For Egypt, which is the top importer of wheat and has more than one-quarter of its population living below the poverty line, Russia and Ukraine are the sources of 78 percent of its wheat imports.

In addition to wheat, Russia and Ukraine are large exporters of fertilizer.  Russia, and its ally Belarus, account for 42 percent of all potash exports, which is used for producing fertilizer.

The supply disruptions from the war on Ukraine will particularly impact the agricultural sector in India – one of the largest importers of fertilizer.  India sources one-third of its potash from Russia and Belarus.  Its agriculture sector is sizable and makes up 15 percent of the country’s GDP and provides employment for 60 percent of its workforce.

India is one of the top producers of wheat and makes up five percent of global wheat exports. The U.S. Department of Agriculture reported that demand for India’s wheat exports has grown since the invasion of Ukraine.

As Kip Tom, former U.S. Ambassador to the United Nations Agencies for Food and Agriculture, recently noted, though global traders are adept at “finding supplies and re-routing vessels to meet the need…this only functions if reserves of grain are available.”

Insecure food and short supply in this period of disruption are not the only challenges to combatting the deepening hunger crisis.  The rising costs of commodities are also a significant hurdle.

The skyrocketing price of oil impacts transportation costs, as well as production costs for farmers operating equipment and machinery. Additionally, on March 7, the cost of wheat surged and nearly tripled to nearly $13.00 per bushel.

These costs are ultimately passed on to consumers and aid organizations that provide assistance to those impacted by hunger.

In 2021, before the invasion of Ukraine, the World Food Program had a budget shortfall of $5.3 billion and was forced to reduce rations in many places.  Now, as commodity costs rise and supply disruptions continue, it will be even more difficult to overcome budgetary challenges and provide food to those most in need.

According to Ambassador Tom, “None of this suggests we will make any progress soon in terms of food security.”  His conclusion is particularly concerning not only from a humanitarian perspective, but also because “We know there is a direct correlation between hunger and migration and the spread of extremism and terrorist activities.”

As more than 3 million people flee Ukraine due to the conflict, we can expect the hunger crisis to impact more countries, as well as organizations coming to their aid.  This humanitarian tragedy demands immediate attention and action to reduce the devastating effects of hunger around the world.