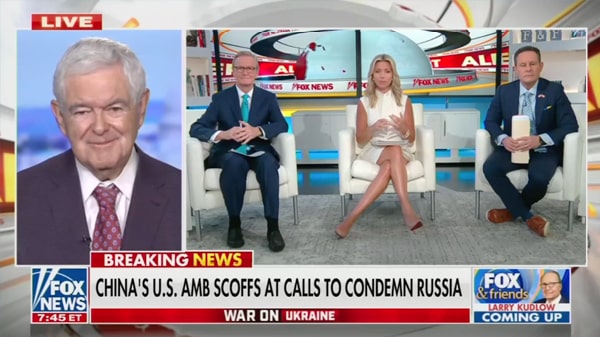 Well, first of all, they are Russia’s ally. Both Xi Jinping the head of the communist party in China and Putin have pledged that they are going to be close friends and allies, period. So, there is, you know, China sees a great deal of its future as part of sort of the dictator’s against the free world. And I think that it’s very unlikely that they are going to break with Putin over something as small as invading Ukraine. You know, after all, they are looking at possibly someday invading Taiwan. So, I don’t think they see themselves as wanting to set a precedent that what Russia is doing is bad. I don’t think anybody in the west should rely on a communist dictatorship to be an ally in maintaining the rule of law.

Well, let me say first of all I don’t mind presidents taking some time off. It’s the toughest job in the world and what worries me about Biden is what he does when is he working not when he does when he is bicycling. Let me make a couple of really quick points. One, we ought adopt a policy of giving Ukrainians cruise missiles and surface-to-surface missiles and we should say that any Russian airfield that is bombing civilians, any missiles depot supplying missiles to bomb civilians is fair game and Ukrainians ought to start hitting Russia this idea that Russia gets to invade Ukraine. Russia gets to destroy Ukraine. Russia — everybody is timid and terrified of Putin. Well nonsense. I mean, there is a point you got to say when you cross a certain line — and, by the way, the number one thing that Biden should focus on when he is in Brussels is an open, public declaration of the scale of military reaction that will occur if Putin uses either a chemical or a nuclear weapon. This is a line nobody believes Biden if he says there will be strong sanctions whatever that means. But if we were to say using chemical weapons or using nuclear weapons will trigger the following response within hours, then all of a sudden, the Russians would understand that’s a line they couldn’t afford to cross because the cost would be so horrendous. But there is a real danger. You watch what he is doing in Mariupol and elsewhere. There is a real danger that out of frustration that he will use the same kind of chemical weapons that he used in Syria. We can’t tolerate that but not tolerating it means you have got to move and do something. One last point. All the aid we are sending them is 1/44th of the equipment we left behind in Afghanistan. Think about that. We gave the Afghans 85 billion. Biden wants us to feel good that we are sending about 2 billion to a country fighting for its life. And lastly, if you had a chance, Peter or somebody should ask the white house, are the missiles, are the high-altitude anti-aircraft missiles in Ukraine? The president talked about it last week. Victor Kripchez said I think very intelligently in the “Wall Street Journal” that time is life. And I think we need to realize Ukrainians are dying every hour while Americans are holding press conferences.

I am certain what happens. Every dictator in the world decides they can get away with something. The world becomes dramatically more dangerous. And, Putin will then start pressuring Finland, Latvia, Poland, Lithuania, Romania. He is not going to stop. He wants to recreate the soviet empire.  We teach him that it’s ok we increase the risk of Taiwan enormously if Putin gets away with this.