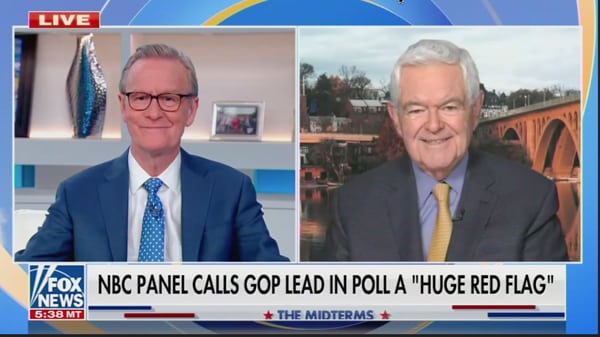 Yeah, look. I mean, the problem for the Biden presidency is that they have no believable explanation for the various disasters, whether it’s the millions of people crossing the southern border. It’s the rise in crime rate. It’s the difficulty with education. Or the two things that are going to ultimately, I think, defeat the Democrats this fall, the price of food, and the price of gasoline. Food is actually going to be a bigger issue than gasoline. There is enormous worldwide food problem created in part by what’s happening in Ukraine which was a fourth largest food exporter in the world. And the food agricultural organization just released a statement that this is the highest price of food in history and that their index indicates millions are going to be starving in much of the world and America they are just going to be at great pain. And they are going to say Joe Biden did this and I think the theme is going to be we can’t afford it we can’t afford the gasoline price. We can’t afford the heating oil price. We can’t afford the price of chickens. I mean, just go down the list. And it think it’s going to be impossible for Democrats to answer that effectively.

First of all, I don’t think there is any reason for President Biden to ever duck out. He spent his lifetime trying to get there. He now there he thinks he is doing fine. Remember, you sit in the white house. You are surrounded by staff. The staff all tells you are terrific. That it’s just a problem of communications. And among Democrats, he is still, I think, popular enough he probably could win renomination. Now, I think it’s going to get worse all year as it did with Jimmy Carter which the only administration comparable than Biden. Biden is much worse than Carter on almost every front. And so, the pain level is going to be higher. The embarrassment is going to be higher. Just look at the speech in Warsaw which ends with, you know, for god’s sake Putin has to be gone and within an hour the white house is saying oh, be gone doesn’t really mean be gone. Well, all this stuff adds up and you go, you know, he is bad, and Kamala Harris is worse.

I don’t see any poll that indicates people blame Putin more than Biden. The problem for Biden is he canceled the pipeline. He has been anti-gas and oil. He campaigned as a green candidate. He said he would close down the fossil fuel industries. You know, he can’t go back now and say he didn’t mean it and the price of gasoline, and the price of food were going up before you had the problem with Ukraine and the Russian invasion of Ukraine. So, I don’t think the average person is going to say oh, boy I would really like to vote against Putin. They are going to say look, you are the guy in charge and you’re the president. By the way, the president doesn’t pay for marine one’s gas. Doesn’t pay for air force one’s gas. He doesn’t pay for the limousine’s gas. He doesn’t feel any of this pain and neither does his staff. And so it’s the country that is suffering. And it’s Biden and Kamala Harris who are out of touch with reality.