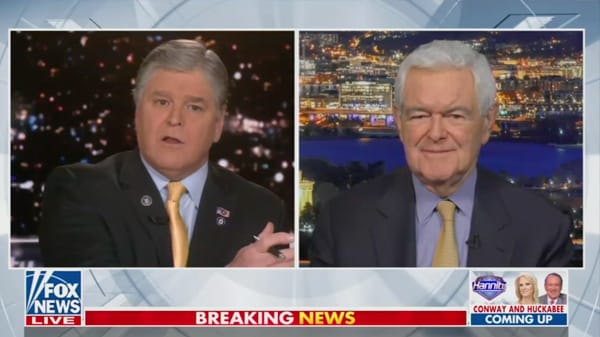 First of all, you have a real problem. Because you have a cognitively challenged president and a cognitively hopeless vice president and to have both of those in those positions means there’s no place to turn to for leadership. I think the performance over the last few days by President Biden was virtually equal to some of Kamala Harris is performances and I think the country should be really worried. This is not a game. This isn’t a clever political campaign. This is a real history involving two nations that between them have around 11,000 nuclear weapons and involving a dictator who has to right now feel deeply paranoid. He has always assumed that the United States wanted to destroy the Russian system. Now he has had Biden sort of blurt it out at least it seems by Putin. And I think this is extraordinarily dangerous. Meanwhile Biden doesn’t deliver. If you watch Zelensky the president of Ukraine is begging in every speech to every country. Why haven’t the democracies flooded him with weapons? So he’s so busy managing and getting the weapons outcome he doesn’t actually have to go beg for them. There is something pathetic about all the western nations talking without doing anything. And every hour Ukrainians are being killed while western politicians talk. It’s one of the most disheartening performances I think in my lifetime the most disheartening performance by the United States and its allies.

Churchill in order to get the British bureaucracy moving had a little sticker that said action this day. He was trying to get across they were in a real war. The Ukrainians know they are in real war. People say you can’t give them fighter aircraft. That’s just nonsense! If you are giving them antiaircraft systems, if you’re giving them antitank systems, it is hardly the escalation to also give them antiship missiles to keep the Russians simply away on the coast and, two, give them aircraft and for morale purposes. If the Ukrainians risking death every day is telling us that what they need? We ought to give it to them. I think that I literally mean it, this is the most cowardly performance by the western democracies in our lifetime. You have to go back to the 1930s to see anything comparable to this. It’s really tragic from 1945 on we were a system that believed in itself. We were a system that contained the Soviet Union. We were a system that people respected. Now frankly, you have Putin every day ordering more and more attacks. 98% of Mariupol has been destroyed. 96% of the buildings have been hit. We talk about we don’t want to provoke him? I think we ought to say that we are going to arm the Ukrainians, finance the Ukrainians, get food and other things, we are going to do everything it takes to defeat Putin in Ukraine. I think anything shorter than that. It’s a disaster for civilization.