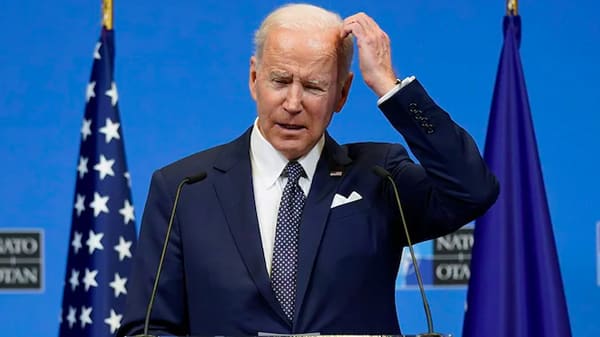 The Biden budget plan is a disaster. We do not have to have a giant, bureaucratic, corrupt government. There are alternative government budget plans that lead to lower taxes, lower interest rates, more jobs, and much less inflation.

I am writing this on April Fool’s Day. That may be the perfect day to try to explain how impossible, and indeed foolish, the newest Joe Biden tax proposal is.

Of course, the first question you have to ask about this new tax is: Why you think it would remain restricted to a small group of wealthy people? Government and pro-government politicians have a never-ending need for more money. They would immediately start targeting the next lowest threshold to shake down.

History is filled with examples of a tax starting small and steadily growing. When the income tax was passed in 1894, it was supposed to apply to only the highest 10 percent of income earners. Naturally, over the years, that was extended to almost everyone. The Biden wealth tax would rapidly face the same kind of expansion. Within a few years, virtually everyone who owned any property, stocks, or businesses would face a complicated system of paying taxes on an increase in wealth – even if you did not have any increase in income.

There are three even bigger problems with this kind of wealth tax.

First, who is going to measure your assets every year? Are you going to have an IRS agent pouring over all your assets (including your home) and then telling you what you are worth in his or her opinion? As the government needs more money, it will simply extend the number of things that count toward your assessed wealth. They’ll open up furniture, paintings, jewelry, family heirlooms, your car – the list will only grow?  Imagine the level of paperwork – and the frequency of appeals to a reviewing authority – this will lead to. (Of course, this activity will only give government an excuse to expand and create new bureaucracies).

Second, if you don’t have enough income to pay the wealth tax, will the government force you to seek assets to meet this new obligation – including the assets it just assessed? Does that represent a taking of your property?

Third, what about the years when you lose wealth? Imagine the mess after the 2008-2009 financial crisis, when the price of housing dropped dramatically – or the impact of the COVID-19 pandemic on many businesses. Knowing government and liberal politicians who are desperate for money, this will be a one-way street. If you succeed, you pay. If you lose, you get no relief.

If you look at the Biden budget proposal, you will see why they are desperate for more money from the American people.

House Republican budget committee members analyzed the Biden budget and reported it has $73 trillion in spending over the next decade. That is a 66 percent increase over the last 10 years. They went on to assert that Biden included $58 trillion in additional taxes. That is an 80 percent increase over the last 10 years. Finally, they said the new Biden budget would add $16 trillion in national debt, with more than $1 trillion deficits every year for the next decade.

This kind of absurd borrowing, taxing, and spending is not inevitable. When I was Speaker, we reformed welfare with a work requirement, cut taxes and regulations to accelerate economic growth, and balanced the federal budget for four straight years (the only time in your lifetime). By 2001, just before 9/11 the Bush administration had a working group on how to manage the money supply if we paid off the entire federal debt. (Alan Greenspan, then-chair of the Federal Reserve testified in public that they had never before had to plan for a debt free system.)

We do not have to have giant, bureaucratic, corrupt government. There are alternatives that lead to lower taxes, lower interest rates, more jobs, and much less inflation.

The Biden approach is a disaster. Consider the analysis of the nonpartisan Tax Foundation. The foundation noted that since the plan calls on taxing unrealized capital gains every year, people would pay taxes on gains which were never actually made. Additionally, keeping track of this would create an enormous administrative cost – and creates a real challenge to someone who doesn’t have a great deal of money in hand but has unsold assets that grow.

“Overall, the proposal moves in the opposite direction of sound tax policy because it would be administratively costly, reduce U.S. saving, and its revenue potential is uncertain…

“The proposal attempts to meet such challenges with a separate formulaic rule to value non-tradable assets, payment periods of nine years and five years, and an entirely separate tax regime with a deferral charge instead of prepayments for illiquid taxpayers. All options, however, introduce new complexities, opportunities for tax planning, and the potential of disputes with the IRS—in other words, economically wasteful activities. Additionally, the tax is levied on assets net of debts, meaning it could encourage additional borrowing to avoid the tax, unless mitigating rules are added.”

You should call your congressman and your two senators today and tell them to control spending, reform the bureaucracy, return welfare to a workfare system and never try to pass Biden’s tax on success.