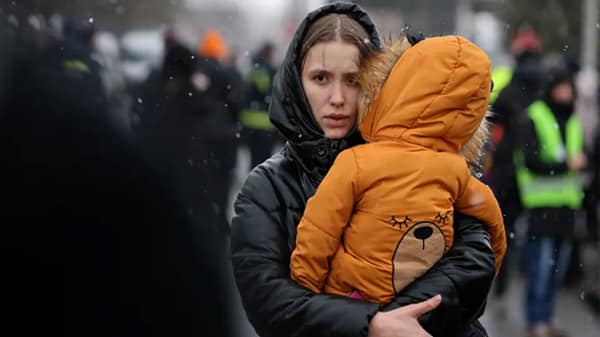 The War on Ukraine has caused the biggest refugee crisis in Europe since World War II. In just over one month, more than 4.1 million Ukrainian refugees, who are primarily women and children, have fled the violence in Ukraine for safety in neighboring countries. Nearly 90 percent of the refugees have escaped to Poland, Romania, Hungary, and Slovakia.

These refugees are desperately seeking food, shelter, and assistance, while navigating language barriers and coping with the insurmountable loss of their families, homes, and communities.

Tragically, many refugees are at risk of becoming victims of human trafficking.

According to the United Nations Refugee Agency, “Refugees and other forcibly displaced people [are] an easy target for traffickers, who prey on the precariousness of their situation to exploit them.”

As the BBC reported, even during peacetime, in Ukraine and surrounding countries, rings of criminal traffickers have been “notoriously active.”

In 2021, the U.S. State Department Trafficking in Persons Report affirmed, “Russian aggression, the conflict in eastern Ukraine, and Russia’s occupation of Crimea have displaced more than 1.4 million people, and this population is especially vulnerable to human trafficking throughout the country.”

A September 2020 report by the European Commission concluded that “14,145 victims of trafficking were registered in the EU-27 Member States” from 2017-2018. Seventy-two percent of these victims were women and girls, and 60 percent of all registered victims were trafficked for the purposes of sexual exploitation.

In the wake of Russia’s assault against Ukraine, many good Samaritans have answered the call to help provide transportation, shelter, and assistance to those affected by the ongoing devastation. However, several reports have recently emerged of criminals seeking to exploit vulnerable refugees.

“For predators and human traffickers, the war in Ukraine is not a tragedy,” warned United Nations Secretary General António Guterres. “It’s an opportunity – and women and children are the targets.”

Traffickers have attempted to lure women and children – both in person and online – by offering transportation, work, or shelter.

Margherita Husmanov, who recently fled her home in Ukraine for Poland, said, “The first day I volunteered, we saw three men from Italy. They were looking for beautiful women to sell into the sex trade.”  Margherita called the police, and her concerns were confirmed.

Sadly, Margherita’s experience is only one of many. Malicious individuals have resorted to more discreet tactics and are now disguising as volunteers.

In some cases along the Polish border, women and children are enticed into unidentified cars. Because of the overwhelming surge of refugees crossing the border, police are unable to check the driver’s identity of “a huge number of cars,” as reported by The Guardian.

Ukrainian refugees are also targeted online by traffickers and violent criminals.  In Warsaw, Poland, a 49-year-old man was arrested for allegedly raping a 19-year Ukrainian girl after offering to help her and to provide shelter. A human trafficking prevention organization in Poland also cited cases of Ukrainian girls being offered plane tickets to Turkey, the UAE, and Mexico from strangers on the internet.

Fortunately, well-intentioned volunteers continue to assist refugees, including more than 650 Polish women who drive refugees as part of the Women Take The Wheel Initiative.

Human rights groups are also active on the ground. Blue Dot safe spaces have been reactivated by United Nations Children’s Fund in partnership with United Nations High Commissioner for Refugees. These safe spaces provide support and protection services for refugees.

Unfortunately, Ukrainian refugees who escape the violence plaguing their homes are still in danger of becoming victims of human trafficking. Only when stability returns to Ukraine will this heightened threat be reduced. The United States, our partners and allies must demand an immediate end to Putin’s aggression and continue to support the efforts of organizations and volunteers on the ground who work tirelessly to assist and protect Ukrainian refugees.