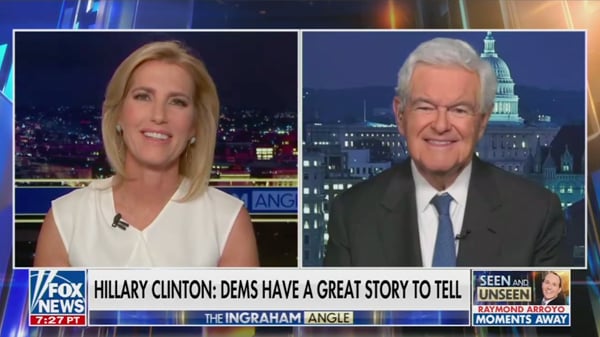 Well, look, I mean I think if you regard what we’re seeing as basically a secular religion, they don’t have any room to negotiate. They can’t, you know — what they’re doing they think, oh, they are sort of divinely inspired by their own brains, they can’t back off. Theodore White warned about this in 1972 when he said the liberal ideology had become a liberal theology. That’s 1972. It’s all gotten worse. It’s all gotten sicker. Donald Trump was exactly right in Michigan the other day when he pointed out their position on transgender is virtually insane. They’d have children doing things that might be not reversible. They clearly place transgender above women. They’re destroying title 9 in women sports. They have policies on the border, policy on inflation. Peter Bashum of the democracy institute just did a survey in which he asked the question, which would do more to help America? Biden leaving office or Putin leaving office? And by 52-43, the American people said Biden leaving office was better for America’s future than Putin leaving office. Now I would think if you’re a Democrat, that number would be very, very sobering, but it doesn’t seem to have any effect.

Oh, yea look, I would challenge Hillary why doesn’t she stand at a gas station and tell people her better story? Why doesn’t she go to a grocery store and tell people her better story? This is the kind of nonsense. Why doesn’t she go and talk to some of the women athletes who are currently seeing themselves being crowded out by transgender men who clearly have unfair advantages? I think Hillary is totally out of touch with reality. The choice is between a cognitively challenged Joe Biden and a reality-challenged Hillary Clinton, that’s sort of the modern democratic party.

Look, I wouldn’t be surprised to see Mitt run in the Republican primaries. I think he’s more likely to run for president than to run for re-election to the senate. It’s a free country. I think he’s got every right to do what he thinks is best, but I think you clearly see Massachusetts values in a Utah senator, and I think that is probably not sustainable. He probably can’t get reelected when you got come down to it, so he’s probably better off to go out in a blaze of glory running for the president one more time.