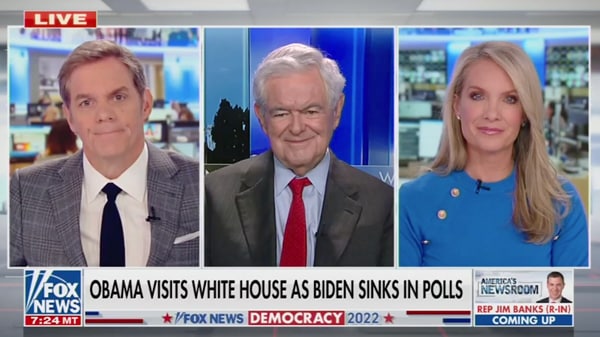 First of all, Callista and I both paid off our student loans, too. So, we join you in this conversation. Look. Barack Obama was the president who in his first term lost 64 house seats. More than we won in 1994. So, the largest gain by the house Republican party in modern times was under Barack Obama because they couldn’t tell their story, or it was a bad story. How do you go to somebody who is pumping gasoline or somebody who is at a grocery store and tell them we got this great story? They are looking at their bank roll, they’re looking at how much the cost of living is going up, they are looking at people crossing the border. They are looking at the rising crime rate. It is pretty hard to go to those folks and say to them if only you understood our story. And I think in that sense that barring some dramatic change, they are heading towards maybe the worst election since 1920 for the democratic party. I think they could easily lose a huge number in the house, a significant number in the senate. Governorships, state legislative races. You know Kenosha, Wisconsin, just elected a Republican mayor for the first time in 60 years. You have all these little signals out there when voters go to vote, they are not happy with the Democrats, and they don’t think the Democrats are good for their personal lives or their families’ lives.

I think that Biden clearly feels subordinate to Barack Obama. Partly because for eight years he was the vice president. You understand that. Partially because Barack Obama is a compelling figure, and he is all there. Biden has all these strange moments of cognitive confusion. On the other hand, you have in Kamala Harris a person who to the best of our knowledge has no capacity for learning, no capacity for leading a team, and no capacity for representing the United States. So, of the three figures, Barack Obama is the most compelling. The most articulate, and I think the most successful in terms of achieving what he wanted to achieve. And I think there is a certain natural intimidation, if you will, Obama’s dynamic. He is open. Biden on a good day is sort of dull and on a bad day is sort of hopeless. I think that’s what you are seeing played out. The pictures you are showing right now, you know, you would think that Obama was president and Biden was back to being vice president. Of course, the other day he thought, I think, that Michelle was the vice president so maybe it’s a step up to remember that he is the vice president.