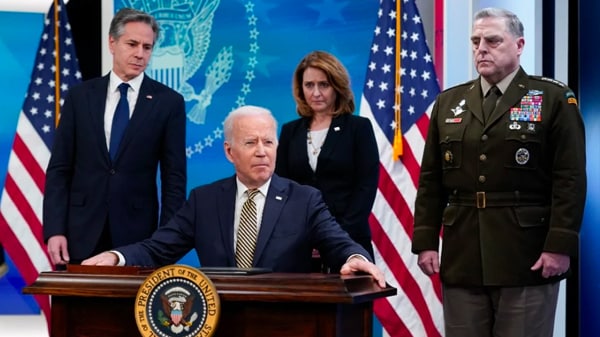 The recent comments by President Joe Biden’s National Security Adviser and the Chairman of the Joint Chiefs are among the most disgusting and morally indefensible sentiments in an already historically dishonest and hypocritical administration.

The recent comments by President Joe Biden’s National Security Adviser and the Chairman of the Joint Chiefs are among the most disgusting and morally indefensible sentiments in an already historically dishonest and hypocritical administration.

Americans have watched the inhumane and relentless bombing of Mariupol and seen a city of 400,000 crushed with Russian violence.

President Biden has sporadically blurted out that Putin is a murderer and a war criminal. The President went so far as to say Putin should be tried for his war crimes.

Now we are told by National Security Adviser Jake Sullivan that the war in Ukraine “may very well be protracted.” Sullivan’s grim projection was then reinforced by the worst Chairman of the Joint Chiefs in our history, Gen. Mark Milley. He said, “I do think this is a very protracted conflict, and I think it’s at least measured in years. I don’t know about a decade, but at least years for sure.”

Of course, this is the same Gen. Milley who oversaw the disastrous withdrawal from Afghanistan. It’s the same Milley who earlier said he thought the Russians would take in Kyiv in 72 hours. Apparently, Milley and Putin had the same mistaken impression of the Ukrainian people’s willingness to fight and the proficiency of the Russian Army.

Now we know that Ukrainians are willing to fight and, if necessary, die for their country. We know that the Russian military has performed so badly that every intelligence estimate prior to the war must be investigated. We must learn just how misinformed and ignorant our multi-billion-dollar intelligence industry is about one of our two major competitors. We would then have to ask why we would believe anything the intelligence community reported – and consider a thorough overhaul with a substantial downsizing to create a more competent, manageable and accountable intelligence system.

Of course, Sullivan and Milley were merely reinforcing what President Biden had said on March 16, when he warned that “I want to be honest with you: this could be a long and difficult battle.” In the intervening two weeks, the Ukrainians were doing better. The Russians were pulling back from Kyiv and beginning to run into equipment shortages and severe morale problems.

There are two things profoundly wrong with the Biden administration effort to describe a long war and a protracted conflict.

First, Ukrainians are dying every day. The goal should be a Ukrainian victory and a Russian defeat – as quickly as possible. Given how well the Ukrainians have done with inadequate weapons and supplies, imagine how rapidly they would start driving the Russians out if the free world was serious about helping. A few countries have been seriously helpful, but the amount of weapons that could be poured into Ukraine – and the sophistication and power of the weapons – could be dramatically greater.

It is no accident that the Ukrainian foreign minister as recently as today was begging for more weapons (especially heavy weapons such as tanks, artillery, and aircraft). President Volodymyr Zelenskyy has done an amazing job reaching out to the world, but it is a sad commentary that he has had to beg for things that should have been enthusiastically provided by once freedom-loving democracies.

The American goal, as a matter of simple decency and humanity, should be to help Ukraine achieve victory as rapidly as possible. No other goal should be morally acceptable when confronted with Russian war crimes and Ukrainian courage. The tone and substance of the Biden-Sullivan-Milley comments are an insult to every freedom fighter risking their lives to defeat the Russians.

Second, the fact that the most powerful military in the world is accepting “a long and difficult battle” that “may very well be protracted” and “a very protracted conflict” that will be measured “in years” is frightening. It means our bureaucrats and politicians are giving themselves permission to cheat the Ukrainians of the weapons and supplies needed for a quick victory.

The Congress should expose the inhumane hypocrisy, demand a plan for a quick victory, and insist that America delivers the tools Ukraine has bravely earned. Anything less dishonors America, increases death and suffering among the brave Ukrainian people, and encourages evil.