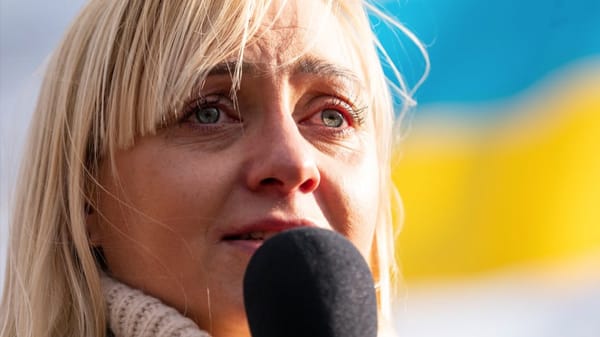 Recent reports emerging following Russia’s invasion of Bucha, Ukraine, are nothing short of horrific and devastating. Reminiscent of Stalin-era brutality, satellite images and journalists revealed bodies of deceased civilians left behind and lying in the streets.

Amidst this devastation, the people of Ukraine have maintained a brave and determined resistance against Russia’s invasion. From troops on the frontlines, to special forces and drones, to individuals and organizations providing humanitarian assistance, the unyielding courage of the Ukrainian people is extraordinary and profound.

But for the Ukrainian resistance to be successful, more support from around the world is desperately needed.

President Volodymyr Zelenskyy has appealed to allies and partners through video conferencing and has asked for more assistance. On March 16, during an address to the U.S. Congress, he said, “’I have a dream.’ These words are known to each of you today. I can say I have a need. I need to protect our sky. I need your decision, your help, which means exactly the same. The same you feel when you hear the words, ‘I have a dream.’”

Others have echoed Zelenskyy’s calls for help. Female members of the Ukrainian parliament and diplomatic corps have been integral to Ukraine’s efforts as most men between the ages of 18 and 60 cannot leave the country and are needed at home to defend against Russian attacks.

Recently, a delegation of five female Ukrainian members of parliament traveled to Washington, D.C., where they were joined by Ambassador Oksana Markarova, the Ukrainian Ambassador to the United States.

“We are here in delegation of ladies-only Ukrainian MPs, because men do have their duty to serve in Ukraine right now,” Ukrainian MP Anastasia Radina said. “We do our job with words, sharing our stories and getting as much attention to them as possible.”

The delegation met with Pentagon and State Department officials as well as members of the U.S. Congress to ask for additional military equipment – namely, fighter jets and tanks – and heightened sanctions.

The remarkable resiliency of these women was evident. As Ukrainian MP Maria Ionova told reporters during the delegation, “We are mothers. We are MPs. We are volunteers. We are coordinators. And we are fighters.”

Before Ukraine gained independence in 1991, female leadership in government was almost unimaginable. In Soviet-era Ukraine, women were often denied high level positions in politics and diplomacy.

By the fourth convocation of Ukraine’s parliament, from 2002-2006, only six percent of the members were female.

Additionally, during the 2010 election, then-candidate Viktor Yanukovych (the ousted and now exiled former pro-Russian president) said his female opponent should “go to the kitchen.”

After Yanukovych became president of Ukraine, his appointed prime minister, Mykola Azarov, presided over an all-male cabinet and said that women were incapable of leading the charge to solve the issues facing Ukraine at the time. “With all respect to women, conducting reforms is not women’s business,” he claimed.

Despite these challenges, women’s influence in government has gradually advanced in Ukraine.  In the 2019 parliamentary election, more than 20 percent of the elected candidates were women.  Further, in local elections in 2020, nearly 38 percent of elected deputies were women.

The recent delegation to the United States underscores the important role that women now play in government, security, and prosperity. Following the visit of the Ukrainian delegation, a group of 44 bipartisan U.S. Representatives wrote a letter to President Biden and requested that additional equipment be sent to Ukraine. The members wrote, “Ukrainians are clear that more needs to be done for Ukraine to win this war.”

The honesty, directness, and leadership that the female parliamentarians from Ukraine exhibited during their visit to the United States may turn the tide of history. Their example is a source of hope and inspiration for the people of Ukraine and freedom-loving people around the world.