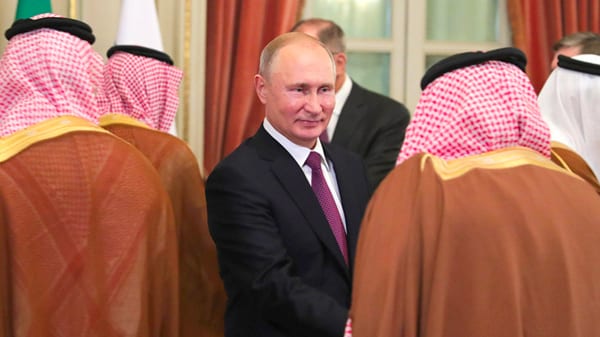 Under the Biden administration, our allies in the Middle East have become increasingly more distant. Biden simply cannot keep them in line, much less inspire loyalty.

“The world will hold Russia accountable.” Those were the words of President Joe Biden the day Russian tanks rolled into Ukraine. They were echoed by other members of the Biden administration and much of the mainstream media. Headlines audaciously proclaimed that the “World condemns the Russian invasion of Ukraine,” or that “world leaders condemn [the] attack.” It would seem, then, there truly is a united global front against the authoritarian advance of Vladimir Putin – and that it is all due to the adept handling of the crisis by President Biden. Unfortunately, reality is more disappointing.

The supposedly united opposition is coming almost entirely from the West and her outgrowths in the Pacific. Even in a symbolic sense, most of the world’s leaders either abstained or voted against a resolution condemning the war – a fact that is carefully worded away by most outlets. Nations as diverse and significant as China, India, Iraq, Pakistan, Algeria, South Africa, Kazakhstan, and Nicaragua all abstained. This is a comfortable way to give tacit approval without directly incurring the ire of the West.

Now, one cannot help but think about the sheer irony here. These media outlets that are incorrectly claiming the world opposes Russia are the same ones that slam others over Eurocentrism. But there is something equally problematic. The biased presentation stems from an apparent effort to work with the Biden spin team. They seek to turn this crisis of their own making into some sort of distorted success story portraying Biden as a strong unifying leader. There could be nothing further from the truth. This is most acutely seen in the Middle East, which has played host to a series of Biden foreign policy blunders.

Our Middle Eastern partners are actively profiting from our suffering from gas prices (and of course the human suffering from the war). OPEC nations refuse to increase oil output. They are maintaining their trade agreements with Russia, continuing more than $20 billion in trade with the country. And they are refusing to sanction Russia. Because of this, a massive portion of Russia’s economy goes untouched by sanctions. This allows them to sustain their war machine in Ukraine. Meanwhile, oil producers such as Saudi Arabia reap the rewards of this human catastrophe through the increased cost of oil. This goes for nations such as the United Arab Emirates (which refused to even condemn Russia at the U.N. Security Council), Saudi Arabia, Egypt, and other Arab states.

The two exceptions to this, arguably, are Israel and Turkey. The latter is becoming ever more the prodigal son because of the crisis. Turkey is actively facilitating real diplomatic efforts, providing the backbone of Ukrainian air power (via Bayraktar drones), and sending humanitarian aid to Ukraine despite its own large trade ties with Russia. All of this was well before the Biden administration or other European allies were compelled to move. Israel though, while still falling mostly in line with other members of the liberal Democratic order, has been less aggressive than expected during this crisis. Israel was glaringly left out of the list of nations that issued the resolution to condemn Russia in the U.N. Israel has also refused to push Russia towards pariah status by continuing to meet and sign agreements with the belligerent country. Why these moves? The same reasons for why the Arab states are acting the way they are: A weak and unreliable Joe Biden.

Under the Biden administration, our allies in the Middle East have become increasingly more distant. Biden simply cannot keep them in line, much less inspire loyalty. Meanwhile, the UAE is a member of the F-35 program. The Kingdom of Saudi Arabia and Egypt receive billions in aid and military hardware every year. Israel’s relationship with the United States goes without saying. These are not states that should be actively conspiring against American foreign policy. Yet, they are, because of several strategic failures on the part of this presidency.

The reversal of the designation of the Houthis in Yemen as a terrorist organization is one – particularly when the Houthis have escalated strikes on the UAE and Saudi Arabia. Next, the blind push toward a bad renewal of the Iran nuclear deal has irked the UAE, Saudi Arabia, the Israelis, and other Arab partners such as Jordan and Egypt. Biden has simply disregarded these nations’ justified security grievances in his mad dash for a deal with Iran – because he thinks it will help his flagging poll numbers.

As of now, nations belonging to the liberal democratic order, stand-alone. The Biden administration’s inability to lead other partners toward substantive action against Russia is not a product of these nations being diametrically opposed to America. It is a product of an administration that is perceived as an unreliable, unattractive, and weak partner. One that has allowed this war to occur and failed to bring it any closer to an end.