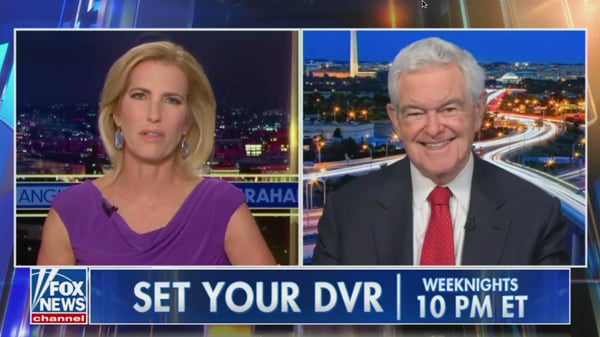 Let me say first of all, I thought your opening monologue was beyond terrific. I thought you captured exactly where we are, not just here, but around the world. The whole effort by the elites to hold onto power no matter what. Look here’s the for the Democrats. They apparently have signaled that they know in advance that tomorrow’s inflation numbers are going to be staggering. They have this game where they talk about it being Putin’s price hike. Nobody believes that. And so, they got average everyday voters, whether they are African American, Latino, white, Asian, it doesn’t matter. They’re going to the gas station; they are trying to fill up their tank. Last time I did it with Callista was $92. Then going to the grocery store. They’re trying to buy groceries. Everything is more expensive. I don’t care how the Democrats message it. How will we get people to be more frightened of some theoretical problem — Donald Trump in 2024 — than the reality, that people are watching the system breakdown. They are watching 18,000 people per day projected to come across the southern border. That’s the city of Atlanta every single month. They’re watching rising crime rates, rising carjackings, and they’re looking around thinking none of this is working! So the Democrat problem is that you can’t scare people enough with some political theory when there already being frightened by the reality you have created.

That such a low blow. I can’t believe you did that. Bill de Blasio’s arguably the worst mayor in the history of New York. Now I think it’s fair to say that Biden’s working his way to being the worst president in the history of the United States and certainly I think Kamala Harris has already won the award as the dumbest person ever elected vice president. But to bring bill de Blasio out to defend Joe Biden. I think it’s just cruelty.

It’s important because when we did some work on the American majority project, we found that if you pitted free-market capitalism against big government socialism, it was 59-16 if people have a choice. If you ask swing voters, it was 82-18 and the reason is young people who might have said socialism sounds good to come out you put big government with socialism. They go, are you crazy? They have a pretty good idea. The government just doesn’t work. It’s a huge amount of money, huge bureaucracies, and very little product. I think in that sense big government socialism is the beginning of the end of the democratic party is a serious competitor.