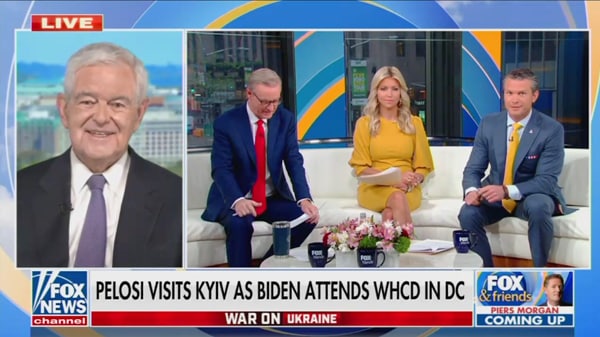 Look, I think, first of all, this is a good example of big government socialism at work. This is a censorship board. Now, the first amendment of the constitution says you can’t make any law that effects free speech. So Mayorkas who I think should be impeached immediately and the board should be defunded immediately. Mayorkas is essentially explaining that they are going to break the constitution, exercise censorship and that’s what it is. Censorship and we’re supposed to trust their appointees who are all left wingers to be fair and neutral. This is nonsense. These people are crazy. I think we need to understand what they are trying to do is a total violation of the American constitution. By the way, by a man who admitted to Jim Jones the other day congressman Jones that — or Jordan rather. Jim Jordan that he didn’t know how many terrorists had actually made it in the U.S. where they were, what was happening with him. So, his real job to protect the American people is not being done while his new job to censor you and me is being done.

Well, Pete, first of all, I keep using certain words deliberately. When somebody says to you the border is closed, the border is closed. And you watch the footage — Fox and every other network hundreds of people at a time crossing the Rio Grande, you are dealing with a person who is either a total liar which in this administration is plausible or a person who is absolutely delusional, out of touch with reality but in either case they shouldn’t be in the cabinet. I mean, how can you have a DHS secretary who says with a straight face the border is closed as you and I are being told that if they drop title 42 there are going to be 19,000 people a day that’s the city of Atlanta every month coming in? This kind of stuff, I cannot overstate this. This is not about ideology. This is about mental illness. This is about people who are crazy, and they are out of touch with reality. I think we need to recognize that people got to take control back and insist on people who had have some touch with reality.

Well, let me say first all that I’m-I think that Nancy Pelosi deserves some credit. It would have been better had she taken Kevin McCarthy who is the next speaker of the house because it’s obvious that you are going to have a continuity of commitment. And I think having a bipartisan delegation would have been a lot better and Pelosi is just such a hard partisan she took only Democrats which in the long run was stupid. You want to communicate to Ukraine that there is a bipartisan commitment that no matter who wins this fall we are going to support Ukraine against Putin. I think secondly, we have all sorts of presidents go into danger zones. We have had presidents go into Iraq; we’ve had them Afghanistan. This idea that somehow, it’s too big a security problem tells you a lot more about — this is an administration by the way where the president is afraid to go anywhere unless is he totally protected. So, he could sent Kamala, and the idea that it would be unsafe is for Kamala is a joke. Tells you a lot about the Biden administration.