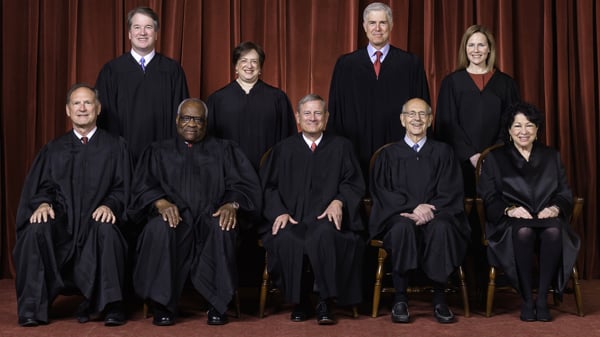 The current uproar over the leaked draft from the U.S. Supreme Court deliberations over abortion – and the rage of the pro-abortion Left over the likelihood that the conservative justices will now repeal Roe v. Wade – is, in some ways, a lot of noise about the inevitable.

The current uproar over the leaked draft from the U.S. Supreme Court deliberations over abortion – and the rage of the pro-abortion Left over the likelihood that the conservative justices (three of whom were nominated by President Donald Trump) will now repeal Roe v. Wade – is in some ways a lot of noise about the inevitable.

Roe v. Wade was a 1973 U.S. Supreme Court decision that legalized abortion across the whole country and made America one of the most extreme abortion systems in the entire world. Importantly, it was a court decision by appointed judges – not legislation made by elected legislators. It was inevitably going to be overturned sooner or later.

As the leaked draft asserted, “Roe was egregiously wrong from the start. Its reasoning was exceptionally weak, and the decision has had damaging consequences. And far from bringing about a national settlement of the abortion issue, Roe and Casey have enflamed debate and deepened division.”

Furthermore, critique of the Roe decision has come from the Left as well. Prior to joining the court, the late liberal Justice Ruth Bader Ginsburg, in a 1992 lecture at New York University, suggested Roe went too far and caused more trouble than necessary. She said, “Measured motions seem to me right, in the main, for constitutional as well as common law adjudication. Doctrinal limbs too swiftly shaped, experience teaches, may prove unstable. The most prominent example in recent decades is Roe v. Wade.”

Ginsburg suggested that Roe could have been more narrowly drawn and less damaging to the necessary American dialogue. As the New York Post recently reported, she suggested “Suppose the court had stopped there, rightly declaring unconstitutional the most extreme brand of law in the nation, and had not gone on, as the court did in Roe, to fashion a regime blanketing the subject, a set of rules that displaced virtually every state law then in force,” she said. “A less encompassing Roe, one that merely struck down the extreme Texas law and went no further on that day, I believe and will summarize why, might have served to reduce rather than to fuel controversy.”

Roe has also been undermined by the progress of science and medicine. Today, we see evidence in nearly every pregnancy that at six weeks a baby has a heart that is beating, and by 15 weeks the baby is completely human. At 15 weeks, babies typically have fully formed noses, lips, eyelids, and eyebrows, and can suck their thumbs. They can clearly feel pain.

The clinical use of the ultrasound in prenatal medicine (which started being widely used in the U.S. in the 1970s) and the fascination parents have with the development of their prenatal children was a major factor in beginning to undermine support for Roe.

At the same time, the development of better medical technology to keep premature babies alive has undermined the “viability” arguments in Roe. The medical arguments of 1973 have simply been made moot by five decades of scientific and technological advances.

Further, the American people are not in clear agreement on abortion. According to Gallup, a plurality of Americans (48 percent) think abortion should only be legal in certain circumstances. Only 32 percent say it should be legal in all circumstances.

A large majority of Americans reject the Democratic position favoring abortions even on the last day of pregnancy (which is clearly infanticide) as in New York and California’s current laws. A 2019 YouGov Poll found that 79 percent of American adults do not approve of late-term abortion (80 percent oppose day-before-birth abortions). These trends are true even for those who consider themselves pro-choice, with 66 percent opposing third trimester abortions and 68 percent opposing infanticide. According to a recent Scott Rasmussen national poll, four out of five Americans believe third trimester abortions should be illegal. Only 17 percent support abortion at any point.

Modifying Roe will move America into the mainstream. In Europe, 47 of the 50 countries have limits on abortion that go into effect before the 15th week of pregnancy.

However, this is not an issue of cold politics – or a callous victory lap for those who oppose abortion. If Republicans approach the issue of Roe with compassion for the difficult choices women can face – and a deep concern for having a dialogue that can lead to unifying most Americans – they will find they have nothing to fear from the debate over Roe.

One final note: The arguments that the U.S. Supreme Court cannot overturn precedent and dramatically change prior decisions – or that Congress is helpless against the judiciary’s supremacy – do not relate to history or reality.

In 1857, the U.S. Supreme Court voted 7-2 that Dred Scott, a slave who had been living in a free state, could not sue for his freedom in federal court as a citizen because no one of African descent could claim citizenship. President Abraham Lincoln was deeply opposed to this decision. He called it the law of the case, not the law of the land. As president, Lincoln refused to enforce the Scott decision. It was effectively overturned by the Emancipation Proclamation, and the 13th and 14th amendments to the U.S. Constitution.

In 1893, the U.S. Supreme Court voted 7-1 in Plessy v. Ferguson that states could adopt “separate but equal” requirements to segregate white and black Americans. That case legitimized racist southern laws and was the law of the land until it was partially overturned by Brown v. Board of Education in 1954. Congress later completely rejected it in a series of civil rights laws.

Would anyone seriously suggest that the Court’s decisions on slavery or segregation should not have been overturned?

Similarly, if most Americans believe Roe’s support for abortion under any circumstance is wrong, it is entirely legitimate for the current Court to reverse a 49-year-old, erred decision that has been made obsolete by modern science and medicine.

We do not have to fear this debate. The pro-abortion extremists are wrong and a distinct minority.