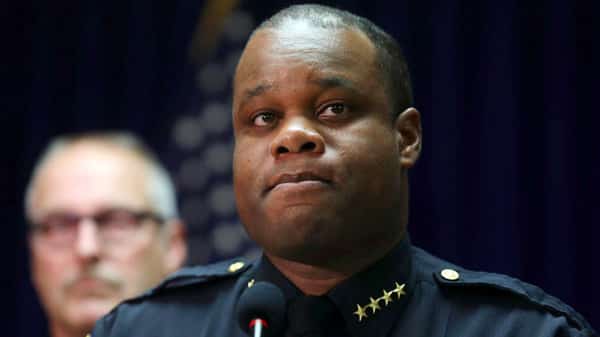 The great party migration conveys the general dissatisfaction and disappointment among American voters in the Biden administration.

American voters are no longer backing the Biden administration. Recent data shows that Democrats are increasingly abandoning their party in support of the Republican platform. This great party migration conveys the general dissatisfaction and disappointment among American voters in the Biden administration. Among these party changers is former Rochester New York Police Chief La’Ron Singletary, who is running for Congress in New York’s 25th Congressional District as a Republican.

Chief Singletary is a resident of the Rochester community and life-long Democrat. For over two decades, Singletary served in law enforcement and became police chief in 2019. In 2020, Singletary made national headlines for his conflict with then-Mayor Lovely Warren, who attempted to blame the death of a black man who died in police custody on Singletary. He later sued the mayor for defamation.

Since resigning as police chief, Singletary has seen the hazardous impact anti-police narratives have had on the city of Rochester. In 2021, the city had a higher homicide rate per 100,000 people than either Compton, California or Chicago. Anti-police rhetoric has left the RPD short-staffed and unable to address crime. For months, Singletary watched members of his own party diminish the incredible work of the police force. Singletary said that he did not “leave the Democratic Party, the Democratic Party left me.” His campaign is centered on empowering police departments and helping repair the Black and Hispanic communities that the defund the police movement has disproportionately impacted.

As the November midterm elections approach, this party migration may play a huge role in dismantling the Biden administration’s lofty agenda. This is especially important in states where Democrats hold narrowing majorities. In Pennsylvania, the Democratic advantage will be the smallest in a general election since 2005.

Gallup analysis also showed that American’s party preferences shifted over the course of 2021, indicating potential momentum for the midterm elections. Party identification shifted from a nine-point Democratic advantage in the first quarter of 2021, to a five-point Republican advantage in the fourth quarter of 2021. There was also shifting shown in independent voter preferences throughout 2021.

As the 2022 midterm elections approach, we are likely to see an incredible red wave make its way through the country. As former Democrats migrate into the Republican party, it is clear to see that the current administration is not working. Crippling inflation, failing promises, and high crime rates are only a few reasons why we have seen, and will continue to see, a great party migration moving forward.