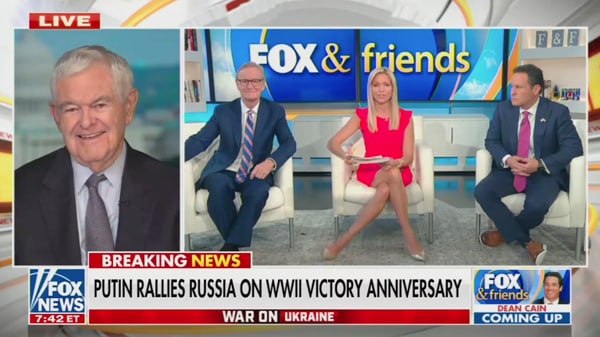 Well I’m a little surprised. I think that he is, Putin is in a difficult position. They made a mistake. They thought Ukraine would be easy. It’s turned out to be very hard. At the same time does he want to escalate to a point where he is involved in a war that he can’t possibly win? And that would be a war with the entire west. So, he can’t figure out at this stage how to get out of it. The Ukrainians, I think, are gradually getting stronger and not weaker. The Russians are on the other hand are getting weaker, not stronger. I think from a western perspective, it’s helpful to remember, May 8th really matters in Russia. The war between Germany and the Soviet Union was a war of annihilation. They lost 30 million people. So, from their standpoint that’s why the word Nazi has such huge power in Russian culture. Because they literally saw the face of total annihilation and defeated it. And that included Ukraine which lost millions to the Nazis. So, there is a whole background historically to what we’re watching right now but, in the end, they are not going to win. The technology of the west, the courage of the Ukrainians and the degree to which a corrupt dictatorship ultimately undermines its own systems. So, you are not going to get any initiative out of the Russian army. Because, they have all been taught basically to hide and hope the dictator doesn’t notice you.

I thought he would, but he hasn’t done any of the things that would be sort of the next big stage. He hasn’t announced a nationwide draft. He hasn’t increased the kind of weapons they are using. The truth is he is strategically suffering a disaster. I think both Finland and Sweden are now going to join NATO. That would never have happened if he had not invaded Ukraine. I think it’s very likely that the longer this war goes on, the more the Russians are going to lose in casualties. And the more Ukrainians are going to recapture their own country. So, he is right now playing a losing hand and I think doesn’t know how to get out of it.

There is no question that Elon Musk is probably the greatest inventive entrepreneur of our lifetime. Now whether it’s Tesla or its batteries or you name it. The very fact that a private company could shape an entire battlefield by technologically using space, and this should be a reminder to all Americans, the space force matters. But president Trump created, and Vice President Pence led at the space council this stuff really matters. And the Russians had no calculation. Nobody in the world would have had a calculation to say gee, what if somebody brought in an entire space-based internet and that’s part of why the Ukrainians have been able to use these drones because they are able to control them through SpaceX’s capabilities. I would also say this. And the Russians need to be told this by the Biden administration. The deliberate killing of an American is an act of war. So, all these various threats about Elon Musk are nonsense. And we should be prepared as a country to protect our citizens, period. And we should communicate to the Russians this is not something we would tolerate. They have a long history of poisoning people, including in Great Britain several people have been killed by the Russians. We should indicate quite clearly, we protect Americans and if the Russians were to actually go after Musk, we would have to see that as a very deliberate act of war against the United States.