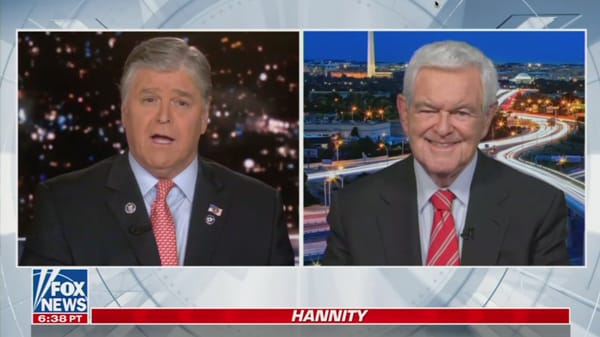 I think you have to start with an assumption that if you are on the big government socialist left, you can’t tell the truth. Almost nothing they are doing is acceptable to the American people. The fact that they are soft on drugs at a time when over 100,000 Americans died from overdoses last year. The fact that they lie every single day about illegal immigrants coming into the country. As you said earlier in the show, they lie about where they are sending them. The fact that they lie about the crime rates, they lie about the impact of releasing murderers and rapists and carjackers back on the street. All of these things are normal. I just went through in my newsletter that is just coming out, taking the abortion bill up in the senate, which only got 49 votes and those 49 senators were nuts. That abortion bill is radically worse than Roe v. Wade, radically. It provide thinks the American people bitterly oppose. It allows abortion at any time no matter how late refuses to allow people to be counseled on abortion. It uses taxpayer money to pay for the abortions. You go down the list on things on every single major item the America people are opposed. So do you think any of these senators are going to go home and say probably yes, I voted for six, seven, or eight things that you hate. Do you think Sen. Warnock in Georgia is going to say yes, I voted for the most radical abortion bill in history. They’re going to lie. And I think this particular lie is part of a very long-term left-wing belief that everybody in America ought to have access to drugs, the drug should be totally decriminalized. There are a couple of bills in various states where Democrat legislators have proposed that fentanyl in small quantities could be legalized. Now this is madness. Fentanyl kills. And yet they are undermining culture, forces them to be for the most permissive possible society.

You have to figure out a t-shirt of some kind that captures sort of all of these different things. Look, the fact is, the correct answer for all of us who is conservative is simple. They yell ultra-Maga we say higher prices. They say ultra-Maga, we say there’s not enough baby formula to go around. They say ultra-Maga we say we are tired of our friends being killed. I think the world we stand for it so dramatically better than what the Democrats are not delivering that they can make up any name they want. They can hire every consultant they can find. It ain’t going to work. Because in the real world gasoline prices are at an all-time high.

I think you have to fight every single campaign and you have to make sure that you can win. It is harder in the senate. I think the house, you are going to get a title wave. I think Kevin McCarthy is going to become speaker. In the House I think you are rightly worried about Kathy Burnett in Pennsylvania. One or two candidates who were unelectable at all of the sudden we have a much tougher fight in the Senate.