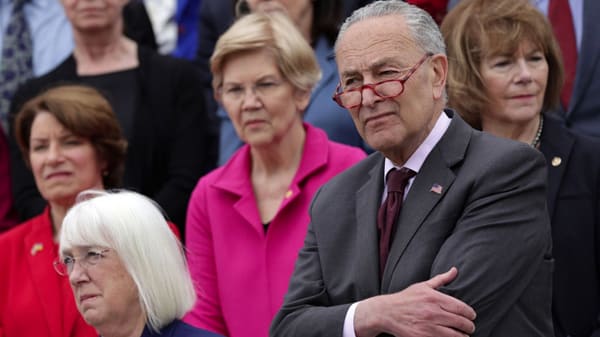 Democrats claimed their position on abortion has overwhelming American support, the fact is that the bill was filled with provisions that the American people deeply oppose.

In a moment of self-destructive ideological fanaticism, 49 Senate Democrats voted for the most radical abortion bill in American history – the so-called “Women’s Health Protection Act.” More accurately, Democrats should have named their bill the “Abortion for All Act.”

While the Democrats pretended the bill was merely codifying Roe v. Wade into law, the fact is that the bill contained a laundry list of radical provisions. In short, the bill would codify abortion up until birth with effectively no limitations and eliminate nearly all state laws regarding abortion.

While Democrats claimed their position had overwhelming American support, the fact is that the bill was filled with provisions that the American people deeply oppose.

Although the bill failed, it’s worth looking at the radical provisions that every Democrat – with the exception of Sen. Joe Manchin – threw their support behind.

Senior Legal Fellow at the Heritage Foundation, Thomas Jipping, wrote the bill would “prohibit, and require the repeal of 11 categories of abortion regulations and any that might be ‘similar’ to them… [including] anything that might even ‘delay … some patients’ from getting an abortion, ‘indirectly’ increase the cost of doing so (whatever that means), or even that necessitates a trip to the doctor’s office.”

Previously, due to the state’s “important and legitimate interest” in the welfare of America’s minors, the Supreme Court upheld a parental consent requirement for minors looking to get an abortion. But in the Democrat-led bill, “parental involvement laws (notification and consent)” are considered methods that would “complicat[e] access to … abortion services.”

According to Jipping, “When all is said and done, the Women’s Health Protection Act would, retroactively and prospectively, prevent any government, at any level, from enacting or enforcing ‘any law, rule, regulation, standard, or other provision having the force and effect of law that conflicts’ with any provision of the act.”

This is a total, complete disregard for our Constitution and federalist system – which was instituted to prevent the concentration and abuse of power. It is no wonder Ben Domenech wrote in The Transom, “this bill goes way further than codifying Roe — instead, it represents an unconstitutional power grab which ignores the 10th Amendment and strikes down state restrictions even allowed under the Roe and Casey regime.”

The evidence is overwhelming that the American people deeply oppose many provisions of this bill.

Consider that the bill would have essentially eliminated limitations on when a baby can be killed, yet 71% of the American people oppose abortion up to the moment of birth. In fact, 54 percent support limiting abortion after 15 weeks, a more liberal line than most European countries. Further, 50% of Americans favor limiting abortions after six weeks.

Unlike Senate Democrats, Americans believe that parents should be notified before their children have an abortion. Some 70 percent favor parental notification laws.

To have informed consent about an abortion, a majority of Americans (57 percent) favor showing an ultrasound of the baby to the mother. An even larger majority (88 percent) favor informing women about alternatives before having an abortion.

Additionally, a 24-hour waiting period before having an abortion is favored by 66 percent of the American people. That is parallel to the practice in many European countries.

Finally, while the left is passionate about making pro-life taxpayers fund abortions, the American people – by a 20-point margin – are in favor of the Hyde Amendment language that prohibits taxpayer-funded abortions.

Why would the Democrats adopt an extremist and unpopular position on maximizing the opportunity to kill babies?

This has been a long evolution that has made it more and more impossible to be a pro-life Democrat. Seventeen years ago, Matt Bai wrote in The New York Times, “Republicans emerged as ‘the party of life.’ And as one leading Democratic operative privately warned a roomful of allies, ‘We can’t just be the party of death.’”

How will the 49 Democratic Senators who voted for this monstrosity defend it when their opponents explain to the public just how bad it is?

How will these 49 Democratic Senators explain why they belong to “the party of death?”

Two of the most pro-life groups in America are Blacks and Latinos. Both are increasingly moving away from the failed performance of the Biden administration and the Democrats in Congress.

As this invitation to abortion at any time, for any reason, in any development stage becomes better understood, the alienation from the pro-death Democrats will deepen and accelerate.

Democratic Sens. Mark Kelly, Raphael Warnock, Maggie Hassan, Catherine Cortez Masto, Michael Bennet, Patty Murray, and 43 others just voted for the most extreme abortion bill in history. This is the platform they will have to defend for the rest of this year.