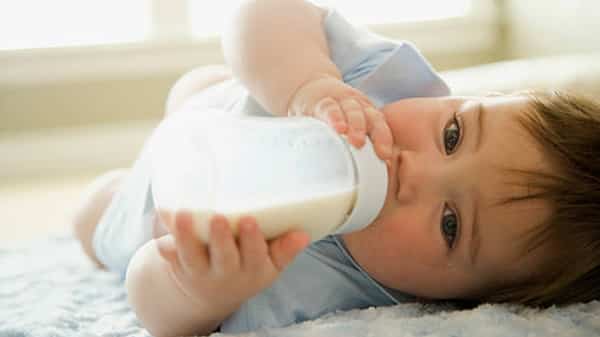 Across America, parents and caretakers of infants are enraged and panicked about the shortage of baby formula. Approximately 40 percent of baby formula is out of stock nationwide, with some states, such as Texas, Arizona, and Nevada, experiencing out-of-stock rates above 50 percent.

The shortage follows a February 17 recall of infant formula after two babies died and two were hospitalized due to a dangerous bacterial infection. The formula came from a now shut down Sturgis, Michigan manufacturing plant run by Abbott Nutrition, a company that accounts for 42 percent of the domestic formula market and is one of four major U.S. manufacturers. (The Food and Drug Administration on May 16 reached a deal with Abbott outlining the necessary steps to reopen the facility. The Centers for Disease Control and Prevention did not find a genetic match between the bacteria strains found in the factory and the affected infants.)

While the ongoing supply chain crisis and the shared monopoly created by welfare program rebates have certainly contributed to this burgeoning crisis, the Biden administration’s response – or more accurately, its lack of action – has ultimately made the problem worse.

President Joe Biden and his administration are attempting to deflect blame for forcing desperate parents to drive hours to find food for their babies amid skyrocketing gas prices.

Asked by a reporter last week whether he could have taken steps sooner to curb the impacts of the shortage before it reached crisis level, Biden responded, “If we’d been better mind-readers I guess we could have.”

On May 18, President Biden took steps to have the government take more control over domestic baby formula production and make imports easier, but these actions are too little, too late – and it’s unclear what impact they will have.

But it didn’t take a mind-reader to see this crisis brewing.

As Politico reported, in September 2021, Minnesota state health officials first notified the FDA and the CDC that an infant had fallen ill after consuming formula from the Sturgis plant.

Weeks later, in mid-October, a former Abbott Sturgis employee sent a 34-page document to senior FDA officials that, according to Politico, “outlined allegations of lax cleaning practices, purposely falsified records and efforts by plant officials to keep the FDA from learning about serious issues related to the plant’s own system for checking bacteria in formula, among other things.”

Despite such alarming claims and incidents of illness, it wasn’t until December that the FDA interviewed the employee, and later, on January 31, inspected the plant.

As New York Congresswoman and mother to an 8-month-old boy, Elise Stefanik, wrote in a February 28 letter to FDA Commissioner Robert Califf, “Allowing months to pass while infants are hospitalized places the health and welfare of our nation’s most vulnerable population at severe risk. … This impossible situation for parents may have been largely averted had the FDA acted swiftly upon initial reports of illness.”

While American babies don’t have enough to eat, the Biden administration has been shipping pallets of formula to southern border processing facilities to cope with its disastrous open borders policy.

After a visit to the southern border last weekend, Florida Rep. Kat Cammack, reported, “there were multiple stocked warehouses” which were “filled with baby formula, diapers, wipes, and clothing.” According to Cammack, “They have been doing this for months and there’s more en route.”

To be clear: No child should ever be left to go hungry. It is, however, important to note that this flow of resources to the southern border is a direct result of President Biden’s policies that invite and encourage our border to be overrun, creating a humanitarian crisis.

With the Biden administration’s plan to lift Title 42, Americans can expect even more desperately needed resources to be directed away from their families and toward the U.S. southern border. The administration has acknowledged the likelihood of an imminent surge in migrants and is planning for as many as 18,000 people to arrive at the U.S. border every day.

As Former Acting ICE Director Tom Homan said, “The Border Patrol is already overwhelmed. If Title 42 goes away, it’s going to be chaos all across the border.”

This blatant and continued failure of leadership has led to a large-scale crisis previously unimaginable in the wealthiest and most powerful country in the world. As President Biden has said, “The buck stops with me.”

Tragically, for America’s families and their beautiful babies, Biden has passed the buck and the burden on to them.